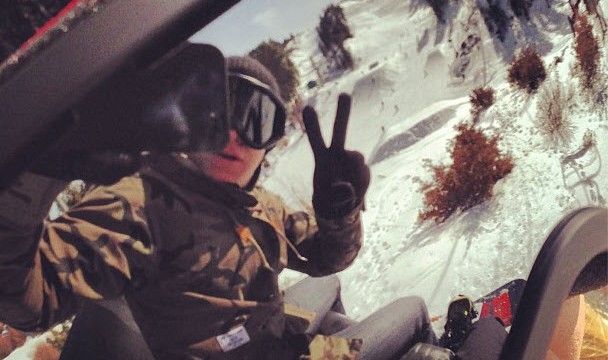 Jef Holm was spotted snowboarding on Jan. 9. with a hot blonde according to Wetpaint. We strongly suspect it’s new love Katianna Bear. Looks like Jef and Emily are REALLY broken up this time. I know its hard to keep track since they recently reunited over the holidays. But Jef appears to be officially moving on. He tweeted a photo of himself and wrote

The photo shows a reflection in Jef’s goggles of a pretty blonde girl. We know Jef is in California, which is where Katianna spent New Year’s eve.

Jef also included the hash tag “bigbear” in his tweet, which is the name of a So Cal ski resort at and Bear is Katianna’s last name. Thus all signs point to Jef Holm and K Bear. We were first introduced to Katianna at the same football game in November 2012. Later the two were spotted together at the San Diego Zoo on Dec. 1 for a romantic date (interestingly at the same time Emily was at Ashley Hebert’s wedding in LA).

Clearly this is a situation!

Why we are in love with 'Bachelor' parody 'Burning Love': Episode 1