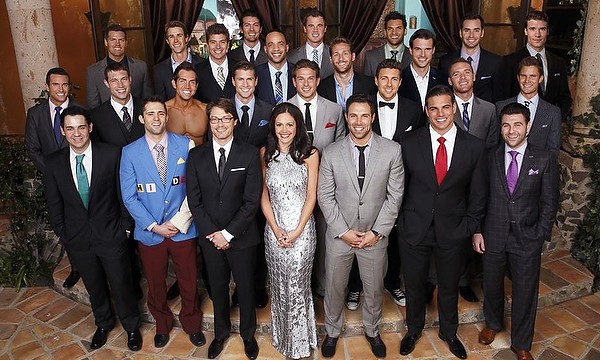 Tonight on Episode 1 we met Desiree’s 25 amazing dudes in the first ever Cinderella-themed Bachelorette. ABC really hammered home the theme for us even having Desiree drive up to her mansion in an old lackluster vehicle and having her extol the heart-wrenching story of her poor upbringing. One thing is for sure Desiree will be the most emotional bachelorette in Bachelorette history.

I was worried about how good she would be at handling “situations”, but she handled tonight’s first situation — Jonathan and the Fantasy Suite Date card, with total professionalism.

Jonathan, the 26-year-old lawyer from Hickory, N.C., has clearly had a few too many cocktails to make a good first impression and is a bit drunk and belligerent about getting Desiree into the Fantasy Suite. Jonathan sets up the most amazing mini-Fantasy Suite at an undisclosed location in the Pad. His first attempt right out of the limo to get her there is a fail. The second attempt, he gets a sit down with her where Dez actually has to excuse herself from the awkwardness.

Then Jonathan goes in for a THIRD attempt at getting Desiree into his personal Fantasy Suite. He can not understand why this doesn’t appeal to Desiree. He even holds her hand and drags her to the door of the Fantasy Suite where Dez has to officially address the first official situation of the season.

Desiree ejects Jonathan for his drunkenness and overly aggressive behavior. And we see the first ever white van escort a contestant out pre-rose ceremony.

Desiree doesn’t miss a beat. She is brilliant, clearly setting the tone for what is sure to be a situation-filled season.

On the previews we see James Case and Drew Kenney break down in tears, both proclaiming they have fallen for Desiree. We see a lot of clips of her and Brooks making out, a guy getting hauled away in a stretcher, and a lot of off-the-cuff camera-man/boom-mic operator shots (which we love).

Ben Scott: arriving with his 4 year old son Brody in the most adorable limo entrance ever. When Brody is told he has to go back in the limo he says “I wish I could go to the party.”

Brandon: busted out with the first overshare situation pulling Dez aside and beginning the sentence with “My mom’s 7 years sober”… you know this guy is gonna be a situation.

Kasey: is kind of amazing for his overuse of the term hash tag after everything he says. He tells her he’s come up with, “Hash tag perfect bachelorette, hash tag marriage material, and hash tag let the journey begin.”

Bryden, 26: The Iraq War vet does a fist pump upon learning that Desiree is the Bachelorette.

Will, 28: The whitest black man I have ever seen! Will loves Bikram yoga, and high-fiving strangers on the street. We prefer the more awkward high-ten.

The 19 guys remaining after the first rose ceremony are:

Is Drew Kenney really looking for love with Desiree?