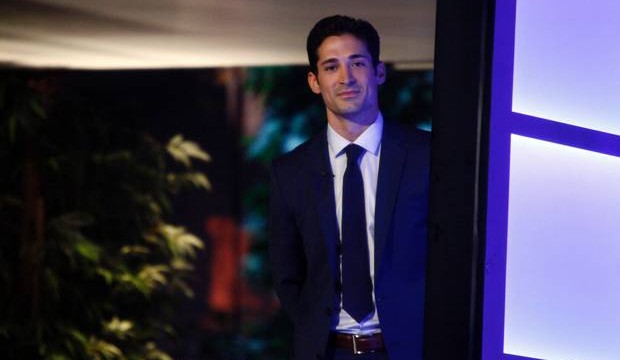 Ben, the Dallas “business financier” gave 26-year-old Allie Wagner, from Cincinnati, OH the boot (which was a good choice because honestly I don’t think Allie wanted to win. I think she was there for the “experience”. She was all like “even if you don’t pick me this has been a great experience, no biggie.” Personally I think Allie Wagner had a big crush on matchmaker Matthew Hussey.)

The Former Miss Texas USA Angela seemed like she started off in the “friend zone” with Ben. Matchmakers claimed she wasn’t “bringin’ it”, meaning she needed to bring a little more sex appeal and ease off on the JC talk. Angela espoused strong Christian values and proclaimed she was saving herself for marriage (I suspect this had a bit to with the breakup).

Her virginity became a big focus on the show this season. From the looks of it Angela didn’t appear to be a front-runner.

But Angela loves a challenge and definitely followed the advice of her professional matchmakers to a tee and planted a big kiss on Ben episode 3. The kiss seemed to change the tone of the relationship and definitely took the two out of the friendzone. The relationship took off from there. The two were engaged last August on the season finale. But alas, today nearly 10 months later we have learned things did not work out between the two.

So what happened between Ben Patton and Angela Zatopek and who dumped who:

Ben mentioned in his blog in early May that it’s been a pretty challenging time since the show finished filming, particularly given the constraints that the new couple has faced (they haven’t been allowed to be seen together in public for almost nine months). He claimed then that the two were still together…. “still going through it” …… “After the finale airs, that’s when we can see if it’s the real thing. Right now, we can’t even go through the real experience of dating.”

Whelp, we know how that went!!!

The two both had very busy schedules sometimes seeing each other every two weeks, other times over a month. On May 7th Patton said they saw each other about three weeks ago, and that their relationship has become…

Here is what Angela tweeted today:

@karaschrand That really means a lot. I tried to stay true to myself through this process & honor him above all else…thank you!

Hmmmm, that sounds like Ben may have dumped her/and or Ben was staying in contact with a certain ex-gf which just wasn’t OK with Angela. NTM we don’t have a diplomatic press release from Angela only from Ben. We also have Kari Krakowski weighing in. Remember Kari, Ben’s ex-girlfriend that came to take him back.

Just watched #ReadyForLove & I’ve got tears in my eyes. @angelazatopek you looked BREATHTAKING.. such a beautiful person inside & out!!

Could Ben Patton and Kari Krakowski be back together?

Watching the #ReadyForLove finale & I can’t help but think about the AMAZING man I have in my life!❤ @tpopealope #theone #WINNING #truelove

Kari sounds like she is in an incredibly good mood these days. That may be a sign of what happened.

Then we have Matthew Hussey tweeting:

Important for us all to realise how difficult it is for these women to be under such scrutiny. They are incredibly brave. @readyforlove #nbc

Gotta love Matt. He’s got game…I still think he and Allie Wagner struck up a romance!! Then we have Angela mentioning Bachelor contestant Ben Scott!! We love it when reality shows cross-over!!! She mentions him many times in her tweets…. Could easily just be a friend so I don’t want to read too much into it. But I would say Angela seems bummed which suggests to me that Ben broke up with her. And Ben is such a solid and loyal guy. I’m thinking the only thing that could tear him away from his fiance would be a serious ex-girlfriend…stay tuned!!! We will keep investigating this situation. If you have any info please share!!!

Ready for Love's Tim Lopez and Jenna Reeves still together?

Angela Zatopek responds to why she and Ben Patton broke up