Jax Taylor’s costars have to come up with $11,000 to bail him out of Hawaii jail 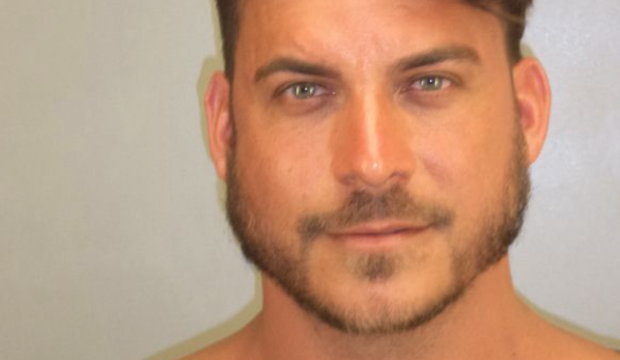 Jax Taylor is caught on Monday night stealing a pair of $300 sunglasses booked on charges of felony theft and unfortunately his costars get dragged in to the situation because they have to scramble to figure out how to come up with $11,000 to bail him out.

Girlfriend Brittany Cartwright who has JUST arrived in Los Angeles from Kentucky to begin a serious relationship with Jax learns that he has been arrested while they are vacationing in Hawaii.

“This poor girl who thought she found the guy of her dreams, moves out to LA, and then boom: he’s in jail,” Scheana Marie says in her ITM. (Yeah this poor girl who has NEVER been on the internet).

The crew has to call Taylor’s mother Marie Cauchi to tell her the good news.

“I’m so distraught,” Marie tells Tom Schwartz. “I don’t understand this young man. It’s like what was in his head?”

There is most definitely a disconnect going on somewhere between Jax and his family. An insider told us “Jax has issues with his family” and claimed they kept a low profile for a reason.

“Dude, you can afford the glasses, so why are you stealing them now?” Scheana Marie proclaims. Exactly. Mr. Jax and the whole VP Rules crew is quite well paid.

“Who is going to post the bail?” Kailey Maloney asks.

“I mean $11,000 is f***ing ridiculous,” Scheana Marie says. “So we have a matter of hours to come up with 11 grand, get him out of jail, get all of our luggage, hop in an Uber, get to the airport to go to Third Eye Blind tomorrow.”

Tom Schwartz talks to the bondsman,

I’m not sure Jax’ costars can claim the victim role here. Jax arrest record goes back 14 years to 2001. So I think this situation was predictable.

Jax Taylor’s girlfriend Brittany Cartwright has an arrest record too!