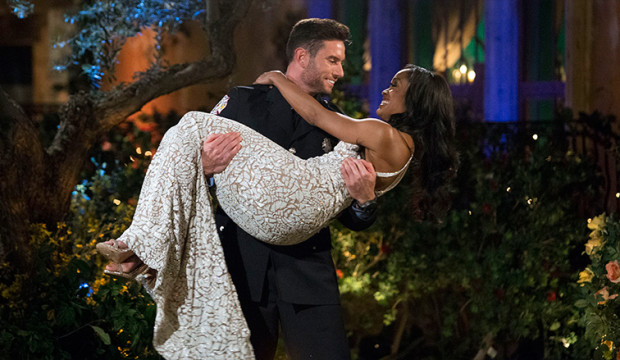 Sort of a surreal night for the premiere of Rachel Lindsay’s season of The Bachelorette this evening. Amidst news of a fatal explosion at an Ariana Grande concert in England, the 9-week fairy-tale journey to find lasting love on national TV begins!

And things continue to be surreal all night. After the cute and gratuitous montage of Rachel dancing and playing on the beach the Bachelorette begins her journey to find a life-partner with her close ‘friends’ from Nick Viall’s season of The Bachelor–a crew that included fan fave Corinne Olympios who really seems to have matured over the last 3 months (at least she is finally out of those terrible twos), the sweet Southern Belle Raven Gates, the lovable Russian, Kristina Schulman, the German hustler/ maybe porn star, Astrid Loch, the shark-dolphin girl, Alexis Waters, Brody Jenner’s ex girlfriend, Whitney Fransway and the cheerleader Jasmine Goode. In other words, I think there’s a good shot you may see all of these girls on Bachelor in Paradise this summer. Corinne shockingly delivers some solid advice. Jasmine made me laugh because she made a comment about ‘safety’ since I will ALWAYS remember her as the girl that wanted to “choke Nick Viall” during sex!! It’s really too bad she didn’t make it to Fantasy Suites!

And yet it was reserved Whitney that dropped the bombshell—saying that she heard from a friend aka producers that a guy named ‘DeMario’ was there for the wrong reasons. Alert!! Threat level has been elevated! This means pay attention Rachel!

But surprisingly Rachel sort of blows it off because she doesn’t want to ‘miss any opportunities’ aka ratings. Anyhow his name is DeMario Jackson and he DOES have a girlfriend.

Then we get our usual intro videos which are always very concerning. Its a good thing Rachel is an attorney because she may need to file a few TROs on these guys! I’m just saying’, when a guy starts his intro video talking about his sexual prowess and penis size (Blake Elarbee) you may want to take out a pen and take note …..and take down his license plate number.

“My last relationship was mostly sex based, sex driven.” …, “Women have told me about the amazingness of my penis.” In his ABC bio he brags about how he likes ‘taboo sex’ which makes me think Jasmine may want to give him a call.

There’s a guy from Chicago named Kenneth (“Diggy”) that owns 575 pairs of sneakers. So his days are numbered for the mere fact that he will require far too much closet space. Peter Kraus who is hands down the HOTTEST guy this season. He appears in a meticulously tailored checkered suit and all I can think is, is that a Jos A Banks suit? Thats right, if Pete looks familiar its because he is in the ubiquitous Jos A Banks ads. Hopefully he doesn’t have any skeletons in his closet—or 500 pairs of sneakers!

Bryan Abasolo who comes out speaking spanish and asks if she’s ever dated a Colombian guy before. What I like about Bryan is he has a job. Bryan is a Chiropractor as opposed to a “former______” or “aspiring______”. I think he’s got a decent chance since Rachel undoubtedly is looking for a guy with an education …..and a job.

Bryan scores the first impression rose after grabbing Rachel’s face and kissing her.

By the way my fave occupation this season is ‘aspiring drummer’! As if just being a ‘drummer’ would not be bad enough, he is still ‘aspiring’ aka unemployed.

Eric Bigger, another early fan favorite who comes out and dances with Rachel.

Several attorneys–one named Jack Stone from Dallas, Texas – (worst name for SEO reasons–2nd worst, not as bad as James Taylor from last season). He’s a 31-year-old attorney who lost his mom to cancer when he was a teen.

Brady Ervin who gets the award for best schtick. He brought a sledgehammer and block of ice crushes the ice and says, “break the ice.” I like simplicity.

Then a guy named Lucas Yancey who is REALLY committed to his schtick! All I remember is that he is from Woodside, California and he likes to say “Whaboom”. I’m sure he has already trademarked it and is certain it will take off, but sadly I think all it did was seal his fate. Dean Unglert who dared to say,  “I’m ready to go black and I’m never gonna go back” which I guess means that he has never dated a black chic.

A guy named Willie who emerges from the limo in an Urkel outfit and slips on purpose. Its about time someone did a slip and fall schtick on that freshly hosed driveway!

There were a couple techie guys that I cannot muster the energy to write about, although I did like Mo Sehgal the professional Bollywood dancer.

And the roses go to…

Stassi Schroeder and ex-boyfriend Patrick Meagher back together and taping Vanderpump Rules together!