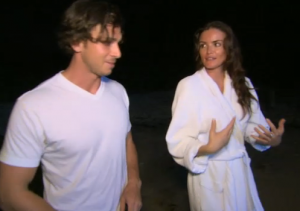 So the girl that can’t stop bringin’ it just BROUGHT IT again! Finally, a sex tape scandal has emerged! (and no, I am not talking about the sex tape she made with Ben in the skinny-dipping scene in Puerto Rico).

The Victoria Secret model, Courtney Robertson, 28, true to character, allegedly made a sex tape with recent ex Cavan Clark (the dude she sort-of-but-not-really dumped just prior to doing the show), and now she is terrified that he may take it public after she totally dissed him and broke his heart by signing onto a reality show to find her soul mate while telling him they were just on a 3 month break.

This is the same girl that seduced Ben into a Bachelor first skinny-dipping scene tossing off her bra, panties and self-respect in front of a national television audience in record time, and the girl who opted to forego her individual underwear in Panama in favor of the local totally revealing fantasy outfit. Yes SHE is terrified that a sex-tape starring her may be released.

Us Weekly broke the salacious story: “She’s worried about her ex exposing secrets about her.”  It’s hard to believe there is anything this girl won’t expose after her rather aggressive nudity on the show and her apparent need for constant genital admiration. I mean this is the first season of The Bachelor where producers had to blur genitals…and more than one time!

An insider told Us “It’s pretty dirty.” “There are photos too.  But it isn’t Cavan’s style to release them.” Let’s hope he changes his mind. Hmmmm, is this extortion maybe?

Us reported that Cavan “was planning to propose to her with a 3-carat Tiffany ring that she picked out.”  Robertson told Cavan “she needed time to be single. She told him she needed three months alone.”

Vote now: Weigh in on ‘The Bachelor’s’ Courtney Robertson

'Bachelor' villain Courtney Robertson: It may be worse than we think