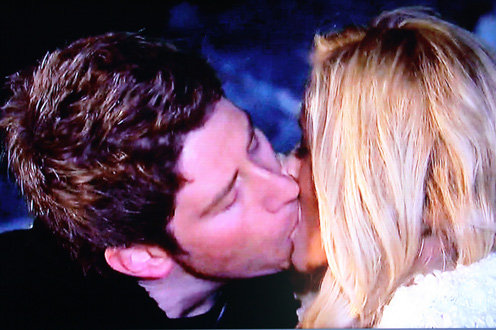 Arie Luyendyk, Jr. is definitely a fan favorite this season on The Bachelorette, but it appears that a major situation goes down next week regarding a past relationship Arie had with show producer Cassie Lambert. I, for one, will be super-bummed if Arie gets the boot because he is my personal favorite despite all the dirt circulating online about the Indy Car driver.

The teaser at the end of the show shows a distraught Emily talking to producer Cassie Lambert about the situation. It was interesting to hear Emily talk about how her and Cassie were friends and were always “paling around” — funny because you don’t imagine the lead off-screen paling around with producers. (BTW, enneagram sixes, which is Emily’s personality type, love the words “pal” and “buddies”).

One of Arie’s friends, Kristina Owen, jumped to his defense on Wetpaint stating “that Arie is there for the right reasons, and did not get the boot from Emily as Us Weekly claimed.”

“People assume it was this really intense, long-term relationship – but that’s not the case,” she says, adding that it’s “blown way out of proportion.”

Owen also counters the claims that Cassie has been “begging him” to be on the show for years.

Kristina claims that The Bachelorette producers (including Cassie) happened to call Arie regarding another driver they were considering.

“They wanted Arie to be a reference,” she said, but apparently Arie already had a crush on Emily Maynard and, “towards the end of the call, Arie threw something out there.”

“He said, ‘Listen, if you’re still looking for people, I’d love to do it.’ They asked him if he was serious and he said yes. They told him that they had everyone they needed, but they would keep him in mind if a spot opened up.”

Kristina claims Arie was not given any special treatment or consideration based on his past relationship with Cassie. And she adds Emily was made aware of Cassie.

“Yes, she was made aware of it,” she told Wetpaint. “But what’s been reported isn’t what really happened. Not even close.”

Well, this is going to be interesting for sure. It’s hard to imagine Arie is a player. He seems very sweet and sincere.  I hope Emily will give the guy a break because we want more Arie!!