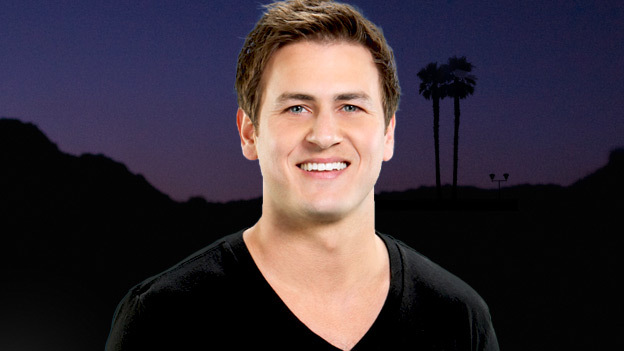 Bachelorette Alum Craig Robinson (Ali Fedotowsky’s season) broke the news on Natalie Getz’s web-show Gossip with Getz that Reid Rosenthal was gonna try and be a good boy on Bachelor Pad 3 so he could get back together with his girlfriend, Miss USA Kristen Dalton, after The Pad. We know Reid from Jillian Harris’ season of The

They supposedly broke up sometime in the past few months after Reid allegedly cheated at a Bachelor Reunion trip in Las Vegas with Bachelor Alum and Bachelor Pad 3 contestant Sarah Newlon this past January — according to Reality Steve.

This may explain why tonight he chose the least sexy temptress, Paige Vigil (Super-fan), to partner with in the first challenge. Bachelor reunion hook-ups usually help alumns secure a position on The Pad, since the awkward, post hook-up tension could potentially create some amazing situations on the show.

I’m sure producers hope the tension between Reid and Sarah will create potential drama this season — especially since Reid is trying to stay faithful to Miss USA.

In March, a fan tweeted Reid that she hoped Reid wouldn’t pick BP3 over Kristen and Reid replied:

“I would never pick bp3 over her. If I went on the show, I would do nothing to jeopardize or look skanky … however we are broken up currently unfortunately.”

Reid’s partner Paige was booted tonight after he lobbied hard to keep her around. Paige felt a connection with Reid as she lamented in the limo about having to leave a potential love connection, but I think that may have been a one-way situation.
We will definitely be keeping an eye on the Reid and Sarah situation this season!