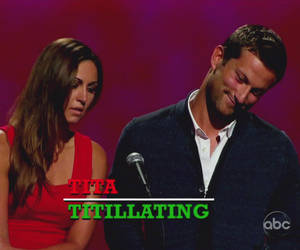 I’d like to start this week’s recap with a general comment about the Bachelor Mansion’s decor: It’s so Cost Plus World Market! Don’t get me wrong. I love me some Cost Plus World Market, but it seems like the set designers are going a bit overboard with the Pad’s shabby-chic and “worldly” decor. The stained glass lanterns. The carved wooden room divider screens. The throw pillows. It’s all just getting to be a bit too much to handle. But, I digress….gotta keep this recap short!

1. The Chris Bukowski and Emily Maynard Situation? Yep. Chris tells Sarah Newlon on their serendipitous one-on-one date that he’s still a bit hung up on his Bachelorette, Emily Maynard. Which. Is. Crazy. At least he tells Sarah that she’s helping to heal his still-open Emily break-up wounds. I mean…they say it takes roughly half the amount of time you were with a person to get over said person, so in this case, Chris should have been over the Emily Situation 3 to 4 weeks after he was given the boot.

2. The Rachel and Michael Situation: First of all, we love us some Michael Stagliano, but Rachel is seriously bat shit loony over him! To even consider leaving the Pad to chase a 3-week-old crush — potentially missing out on the chance to win $250k — is just bananas! And, as we’ve reported, it turns out Michael had a girl he was interested in — the mysterious “Emily from Chicago” — the entire time he was on The Pad, so she was just getting played (and laid). Which brings us to another general situation from this season…

3. The Having a Girl Back Home Situation: Now that the rumor mill is telling us that Stags had “Emily from Chicago,” it’s time for us to give the show producers a bit of a “poor castmate vetting” slap on the wrist. We now know that THREE of the dudes on Bachelor Pad 3 had someone they were interested in back home. Reid had his Miss USA ex-girlfriend Kristen Dalton. Ed, as he revealed to Jaclyn during this week’s episode, and previously to the media in interviews, had someone he was pursuing prior to leaving for the Pad. And now Michael Stagliano with Ms. Emily From Chicago. WHAT GIVES?!?! Also, who are these girls that are allowing themselves to be broken up with so their dudes can go on national TV to hook up with Bachelor Girls….only to be on stand-by, ready to welcome them back into their worlds when the show is over?!?! Situation Alert!

4. The Tony and Blakeley Situation: This is the most unexpected jaw dropper of a relationship, but we’re excited to see these two getting cozy and falling in love. I loved how during their make-shift one-on-one date this week Tony tells Blakeley that she should trust him and let him in because he’s “really been there for her.” (Dude, you’ve been there for her for, like, 3 days. It might take a BIT more time for those Blakeley walls to come tumbling down.)

5. The Ed and Jaclyn Situation: Ed continues to act like a total d-bag toward Jaclyn and Jaclyn continues to allow herself to be treated like crap. It’s the classic mash up of “too much self esteem” meets “too little self esteem.” Now that Ed’s come clean about his feelings and intentions, it’s crazy that Jaclyn isn’t backing off from him at all.

6. The Finale of the Kalon and Lindzi Situation: We could not have been happier for these two! And although this week marked the finale of their relationship on TV, and we were so excited to hear that things between these two lovebirds were still going strong off screen last week, Reality Steve just reported (today) that they are now broken up. BOO! But I’m not sure if I believe him because they are still posting pics of each other on Instagram. Hmm…

To end my getting-a-bit-too-long-to-be-considered-micro recap, a note on a few fashion trends I noticed. First, the DOILY is back! Jaclyn and Courtney Robertson were rocking weird doily-inspired fashion on Ben’s season of The Bachelor… and this week Rachel had on a doily-type shirt and Jaclyn wore not only a doily dress but also a doily skirt. STOP WITH THE DOILIES! And second, did any of you notice that Nick was wearing a black version of the horrible “lady tank” Ryan Bowers wore on Emily’s season of The Bachelorette? Are these tanks a new thing? Is it a “gym guy” thing? I really hope it’s not becoming a thing, because those things are UG-LY!

Till next week….thanks for reading!