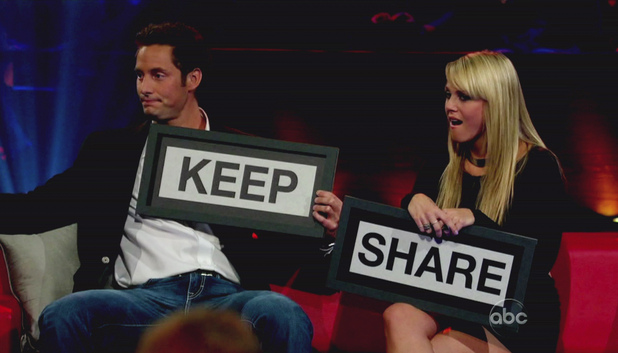 Apologies to my fans (I know there are at least 2 of you!) for not getting this micro recap out yesterday. Honestly, I drank 3/4 of a bottle of red wine during the finale on Monday night over at Ok! Here is the Situation HQ (aka C Lo’s house), and was not necessarily hung over yesterday, but I was also not all that rarin’ to go. So, without even further ado…….

I loved the beginning of the show when Chris Harrison introduced each returning Bachelor Pad 3 castmate, and you could tell how much the live studio audience (aka a cross section of Los Angeles-based Bachelor fans) loved and/or hated each one. The person that received the biggest cheer? Michael Stagliano by far. (It’ll be interesting to see if, after all the d-bagging he did on the show, his fan base will stick with him.) The least amount of cheer? I’d say it was a tie between The Twins and Jamie Otis. Which brings me to one of the biggest situations of the night…..(and no, it wasn’t Nick Peterson choosing “KEEP”)…. Jamie Otis’ weird, bedazzled Pocahontas headgear, earrings and (I’m being totally serious here) STICKY FACE JEWELS!! It was amazing seeing Jamie look so stunned when Team Jaclyn-Blakeley tore into her a bit and told her she was socially awkward. I mean, I felt so much second-hand awkwardness just watching her sit there in her swivel chair in that monstrosity of an outrageously un-called-for outfit!

Other than Jamie’s outfit, the only other notable show moments were:

1) The Tony Pieper and Blakeley Shea engagement: Since there were so many rumors flying around about this engagement prior to the finale airing, I just loved watching Tony’s face as Chris Harrison called Blakeley up into the hot seat. The dude, knowing he was going to be proposing soon, seriously looked like he might urinate right through his pants and onto his swivel chair….but in a cute way. The proposal was cute. And they look really, truly happy together, so that is just awesome. It was pretty great, though, that not 5 minutes after getting engaged, the camera panned back to the newly engaged couple sitting in their swivel chairs and Blakeley was already looking kinda like, “eh. what’s next.” Hahah!

2) Nick and Rachel’s “Thank you, Gentlemen” escorts: We love the Bachelor/ette/Pad cast members that don’t get anywhere near enough air time, like the dudes that snatch the luggage of the ladies and gents that are on one-on-one dates and don’t get roses. During the finale, those cast mates were the “gentlemen” that were responsible for escorting Nick and Rachel to their private deliberation rooms. I just loved how professional Chris Harrison was with the whole thing, thanking the gentlemen ever so gracefully for their important service. Amazing!

3) Nick Peterson chooses to KEEP all $250k: I already wrote a bit about my thoughts on this move here. Honestly, I think all is fair in Bachelor Pad game play. Was it the nicest move? Nope. Will he lose a lot of Bachelor Nation friends? Yep. But, what’s so funny is that he received a freaking standing ovation from the live studio audience. And sometimes those studio audiences can be filled with some TOUGH COOKIES. So, it would seem the general non-Bachelor Nation (aka the real world) opinion on Nick’s move was: AWESOME, BUDDY! But, if I were Nick, I wouldn’t plan on attending any of the future Bachelor Reunions.

Oh, and we loved it when Michael Stagliano was trying to save face by feeling really badly for Rachel because she “lost love and lost the money” and Nick shot back something like, “well, buddy…you can feel free to come up here and comfort her.” BAM! Like, it’s not 100% my fault that she’s bummed, dude, so you can feel free to hop up out of you swivel chair to save her.

All in all, it was an AMAZING, SHOCKING, DISTURBING finale!! It delivered!

And now………..we enter the DARK PERIOD of the year where our Monday nights are filled with depression, anxiety and a lot of perseverating, as we wait for The Bachelor to premiere in January.

In the meantime, we will continue to keep you up to date on all of the latest breaking situations (Bachelor, presidential election, and otherwise)!!!