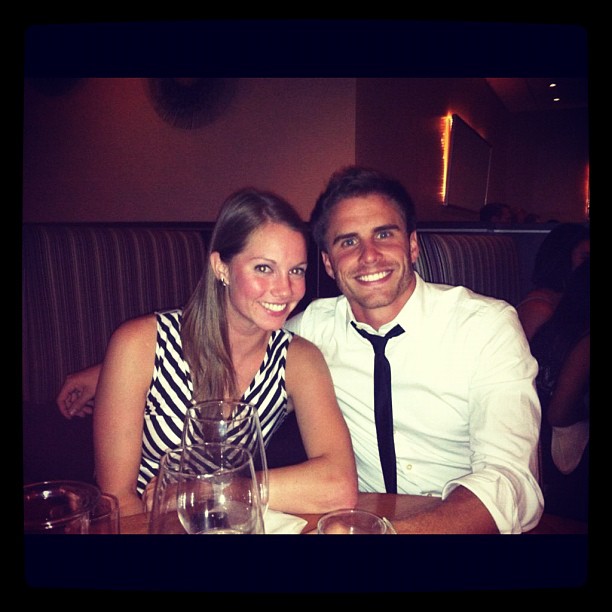 On Thursday, Michael finally tweeted an Instagram photo of him and his new girlfriend, Emily Tuchscherer.

In his blog post for the Bachelor Pad 3 finale, Michael said, “This is without a doubt the happiest I have ever been in my life.” He adds, “I am very much in love.” — Kind of amazing considering the show just finished taping a few weeks ago!

We aren’t buying that Michael JUST met and fell in love with Emily post Pad production. Especially since our very dedicated source insists that Michael is lying and recently sent us proof of the two tweeting pre-show. You can see in our evidence file the date on a screenshot featuring the Instagram pic of Michael with his arms crossed in front of him wearing sunglasses is 8-30-2012 and @EmilyTuch (Emily’s Twitter handle) left a comment that’s time stamped as being left 3 months prior (so, roughly around the end of May, 2012) that says: “Now I remember, this was the look that captivated me:)”.

There is also a tweet that includes Michael’s PR rep and Emily, and shows them talking about their “time between the sheets”.

Case closed! There is a trail of tweets linking Emily to Michael in a romantic fashion prior to taping! Twitter is where all situations are handled!

At any rate, Michael Stagliano still insists they were not dating before or during the taping of Bachelor Pad. As for the future, “We are both being very practical about taking the next steps towards relocating, and marriage and all that good stuff…though that is certainly my intention. :)”

Ouch!!!! That has gotta hurt Rachel Truehart, who Michael famously dumped due to the “long-distance” nature of the relationship.

Rubbing salt into Rachel’s multiple wounds he adds, in his latest blog, referring to Emily Tuchscherer: “She means the world to me” and he even posted a photo of them together on his Instagram Tuesday adding “Finally get to post this. #lovelikethis”.