Good grief it’s taken me forever to blog my latest Bachelor Canada recaps! So long, in fact, that I decided to weigh in on episodes 2 and 3 in the same post. 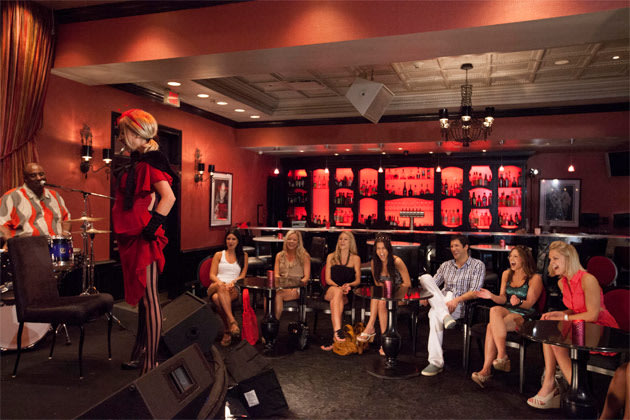 First of all, holy Bachelor budget, Bradman! The mansion where the girls are staying in Victoria, BC is really modern and posh and stylish — unlike the original Bachelor Mansion. (Although, I must admit, there’s something about the cheesy Cost Plus World Market decor of the original that adds to the overall charm of the U.S. show.)

And, the first group dates right out of the gate had the girls and Brad flying to New Orleans, Las Vegas and Mexico! That’s unprecedented. Maybe a girl on an early-on 1on1 might get a private jet ride to Las Vegas on the U.S. show, but, even that isn’t all that impressive considering Vegas is so close to the main shooting locale in Los Angeles. So, Bachelor Canada definitely has a more impressive budget to work with here. And it’s awesome!

Secondly, another never-before-seen difference between the two shows: The couples on the 1on1 dates are actually shown EATING THEIR DINNERS! Never on the U.S. show do you actually see forks and knives hitting the plates and actual chewing occurring during the dinner date conversations. I’m glad the Canadians aren’t wasting their meals like their U.S. counterparts!

The stand-out “situations” so far this season are definitely:

1) Whitney: Wow. Whitney really reminds me of Courtney Robertson on Ben Flajnik’s season of The Bachelor. They both have crazy eyebrows. They both can’t keep their faces from contorting in evil ways. Neither of them could make friends with anyone in the house. They both have that “certain something” that all girls hate, yet all guys get unnervingly charmed and seduced by. And they are both classic, unhealthy enneagram personality type 3s. I loved it when, during her sparring competition with Sophie, she said something like, “You can hit me in my face all you want, but just don’t hit my precious boobs.” UNREAL! If this show’s history proves anything, she will unfortunately make it fairly far, but I don’t think she’ll win. But, I thought that on Ben Flajnik’s season too, so….

2) Gabrielle: Gabrielle can actually be kind of funny from time to time, but, I think I may be laughing AT her more often than laughing with her. I love how she basically calls Whitney a bitch to her face, and then in her ITMs she’s like, “I don’t think Whitney likes me.” Really, Gabrielle? You’re not sure why the girl you call a “bitch” to her face doesn’t like you? It’s a weird personality and a weird sense of humor. But, it’s also really entertaining to watch — especially when it’s directed toward Evil Whitney.

3) Chantelle: Ok, Chantelle is cute. We get it. She’s cute. But, is she high on nitrous or something? That laugh-giggle-giggle-laugh has just got to stop! It’s so awkward and high pitched and annoying and strange! Ahhhh!!

In terms of LOVE CONNECTIONS, I’m really liking Brad’s connections with Kara and Laura B. so far. But I’m hoping we get to see more of cutie pie Britney B in episode 4. I was shocked that Brad chopped his crop of amazing ladies down to 8 at the end of episode 3, and, from the previews, it sounds like he ends up chopping the crew in half again at the end of episode 4, which means he’ll be down to only 4 amazing ladies by episode 5! On the U.S. show, things don’t get that narrowed down until hometown dates, which isn’t until much later in the season. I like that Brad is going a bit off of the conventional script and listening to his heart, though. I mean, I’m sure the U.S. leads know who their Top 4 are by Night One, yet the Producers make them string everyone along for better TV show pacing and house drama.

I can’t wait to watch more next week! I’m really surprised and impressed by Bachelor Canada so far. It’s still NOT THE SAME without the best reality TV host of all time, Chris Harrison, there to guide us through, but….I’m so glad I’m watching!