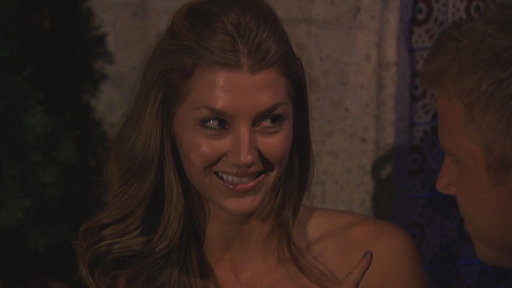 Tonight we got to see Bachelor Sean Lowe confront the amazing ladies he sent home earlier in the season. I wasn’t expecting much to be honest, but tonight one jaded amazing lady stole the show. Ashlee Frazier put Sean in the hotseat tonight in a serious way as she accused him of telling her he had no feelings for the other two ladies.

First of all, Ashlee, have you seen the show? Do you really expect Sean to fess up to dissing his final amazing ladies on National Television? And, don’t you know part of Sean’s journey to find love is that he doesn’t know who he wants to marry until the very last second after a heart to heart armchair love consult with Chris Harrison and after he has chosen a Neil Lane ring? I’m sure it’s even in his contract so I don’t think you can be too hard on the guy.

I actually believe you Ashlee. I think he did say that to you about Catherine and Lindsay. You could tell by his posturing and his quivering mouth that you caught him, but really what did you expect him to say?

But I guess that’s why we love the show. Because no matter how many seasons have aired contestants invariably think they are the anomoly and the lead won’t have feelings for anyone else or be intimate with anyone else which always makes for an amazingly uncomfortable Women Tell All. We also ALWAYS believe that the lead hasn’t made up his mind until the very last second. And we love it that way. BTW, our favorite tweet tonight was from a fan that said “Ashlee organize this…Sean’s just not that into you”. (Remember Ashlee is the “personal organizer”). Major props to the fan with the quick wit!

As a side note everyone seems dying to know if Sean the born again virgin had sex in the Fantasy Suite with any of the ladies in Thailand. Well according to Reality Steve who is almost always right the answer is a shocking “no”.  Steve says “he did not sleep with any of these women.  You can pretty much take that to the  bank”.

1 thought on “Ashlee Frazier: he’s just not that into you”