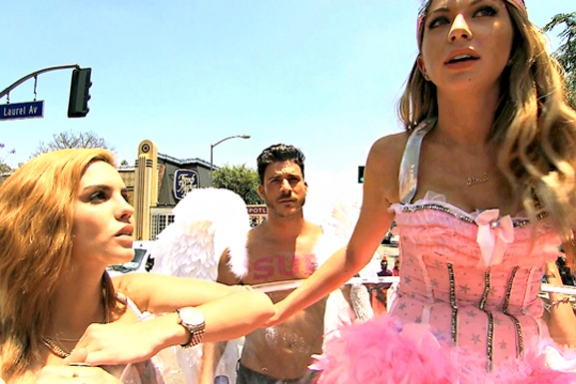 Tonight on Bravo Vanderpump Rules episode 6: “Lisa’s Angels” some serious situations are confronted.  Kristen Doute finally confronts Ariana on some texts she found on Tom’s phone and Jax finally tries to move on from Stassi with a 21-year-old ballerina.

Kristen has apparently been rifling through Tom’s phone and found some texts from Ariana about wanting to “go back to Coachella”.

The SUR cast talks about how Tom often makes friendships with girls and Kristen should chill. But that doesn’t stop Kristen from confronting Ariana while she is bartending.

Ariana gives some very unconvincing responses to Kristen’s impromptu interrogation. I think we can safely assume something has happened between these two.

In the meantime Lisa and the SUR staff take part in the Gay Pride Parade where Stassi finds out that Jax hooked up with a 21-year-old! She is outraged that Jax has moved on.

Stassi’s cold reaction to his breast cancer scare made him think twice about pursuing her.
“I can’t tell if this is Stassi’s version of tough love or if she’s just being her normal raging bitch to me. […] I look at my relationship with her, and it’s not what I want.”
But Jax decides to brag about his one-night-stand in front of Stassi….bad idea!
“It’s just basic etiquette between two exes,” Stassi explains. “You don’t discuss who you’re dating or hooking up with in front of each other! “