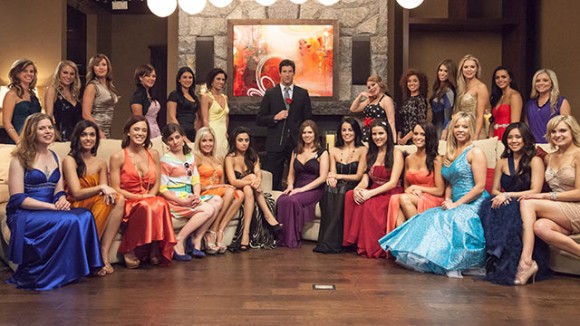 Last week the landing gears emerged from the limo and the ladies touched down for The Bachelor 2014 season 18. Twenty-seven amazing situations arrived at the Bachelor mansion on the freshly hosed driveway to meet Juan Pablo Galavis. The first night was business as usual.

But now the competition–I mean ‘journey’ has officially begun!

We love a one-on-one situation and now we can finally see if Juan Pablo can actually hold a conversation or not! Tonight he takes Clare Crawley, the 32-year-old hairstylist from Sacramento, California to the Calamigos Ranch in Malibu, scene of the famous Des stunt man group date last season where ABC producers have produced an ice skating rink! ABC, we love it when you break out the snow blower! The two enjoyed a  private impromptu concert performed for them by Former “X Factor” season 1 runner up Josh Krajcik–way to cross-promote shows ABC. Luckily we can google or we’d have no idea who that dude was. Then there is a seriously uncomfortable Jacuzzi scene–not because of any sexy time but because of the obvious language barrier. Clare gets a rose.

Juan also takes front-runner Kat Hurd on a 1-on-1. Kat is the 29-year-old Phoenix Suns dancer. The two took a private plane to Salt Lake City, Utah to participate in an Electric Run which looks a lot like Burning Man and looks like a lot of fun! Here is a great video of JP offering a rose to Kat in front of the crowd.

Juan Pablo is off to an amazing start in this ‘amazing lady’ race!!!

1 thought on “Juan Pablo Galavis the 1-on-1 dating situations begin!”