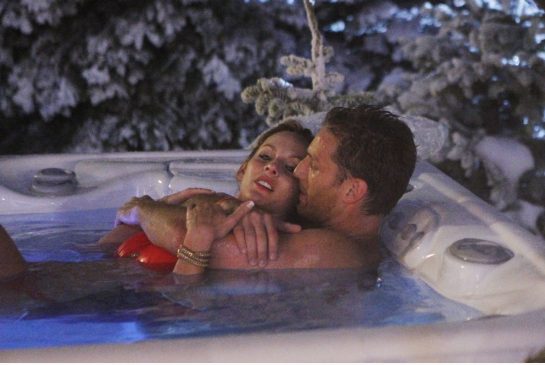 Tonight we had some serious Bachelor deja vu as contestant  32-year-old hairstylist Clare Crawley gets a little too eager to please Bachelor Juan Pablo Galavis as she sneaks back to his suite at 4 a.m. for a ‘swim’ in the ocean. Let’s be clear: the two obviously had sex. As Clare gets out of the ocean she claims: “pure bliss in every way.”

(Remember the Courtney Robertson Ben Flajnik ocean sex scene 2 years ago. Here it is in case you missed it! )

“Cheers to finding love, being loved and making love.”

Juan Pablo has a serious case of regret when he wakes up the next day and realizes what he has done. He suggests his regret stems from his 4-year-old daughter Camila being able to see it, but Juan Pablo also used that excuse for why he would not kiss Lauren Solomon. I am almost wondering if he is not worried about Camila seeing it, but Camila’s mom Carla Rodriquez seeing it.

Clare is mortified when Juan Pablo takes her aside at the cocktail party to discuss their sexy time in the ocean explaining his deep regret–ouch! nothing worse than a guy feeling regret after sleeping with you!

“I hope nobody knows. It was a little weird for me. I’m too fair with people … Maybe it wasn’t right. I have a daughter, I don’t want her to see what happens, if she sees it.”

“Maybe I made a mistake the other night,” Juan Pablo says….. “I don’t want to regret something.”

He then brings up his 4-year-old daughter, Camila. “I don’t want her to see what happened…if she sees it,” he explains.

Clare understandably wants to curl up in a ball and disappear. She claims: “I knew when we were in the ocean, that it was a mutual feeling. If he didn’t think it was right he shouldn’t have done it. I would have respected that,” she says crying.