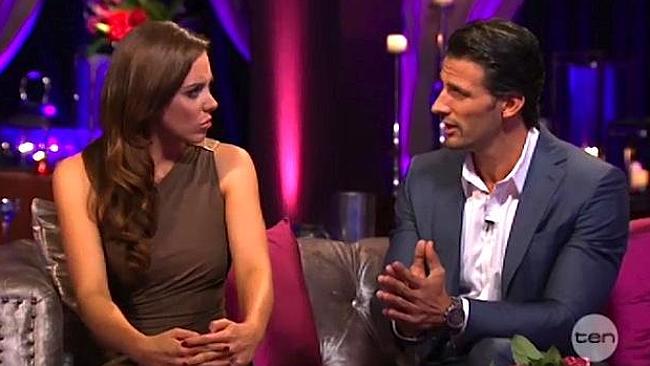 Perth-born model Rochelle Emanuel-Smith was devastated when Bachelor Tim Robards rejected her for 26-year-old Sydney lawyer Anna Heinrich, in the dramatic finale of The Bachelor Australia 2013. She claimed it was “one of the hardest moments in my life”.

In fact in a live blog with New Corp Australia, 27-year-old Emanuel-Smith said she felt “confused and overwhelmed” when Robards broke up with her.

“It took me a few weeks to really settle,” she said.

“All I remember was looking out to the ocean after it happened and giving myself a mental pat on the back… in a way I can look back and be proud now.”

She claims she was ‘blanked’ by the man she fell for on the reality TV series–love Australian expressions!

But it looks like things are getting better for the Australian model. Rochelle was recently spotted holding hands with a mystery man in Nelson Bay enjoying a ‘dolphin cruise’ (so Australian) according to news.com.au. One witness said the pair were “holding hands and kissing” on the boat. “We could tell it was her boyfriend because they were holding hands, and they were kissing inside the cabin,” according to the witness.

“She was really affectionate, he had his hand on her knee a lot of the time and he would put his hand around her and then when they got off the cruise they would walk around holding hands.”

Well congratulations Rochelle! We definitely hope you will be getting the final rose.

Are Tim Robards and Anna Heinrich still together?