Sean Lowe talks about his concerns about nudity, sex, his virginity & Fantasy Suite situations in regard to his Christian testimony 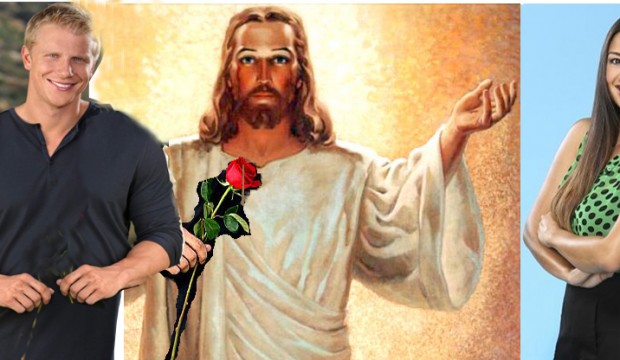 Bachelor Sean Lowe, 30, was certainly the MOST Christian Bachelor in Bachelor history. In fact, one reason we love the religion question is because ABC almost never addresses it! You would think that if you are choosing a life partner in 9 weeks you would want to know what religion your potential partner practiced.

In fact, Sean was so Christian he refused to consummate his love with any of his final 3 ladies let alone fiancé Catherine Giudici.

As a result of Sean’s inspiring and steadfast faith and dedication to Jesus, he became a serious sex symbol to single Christian ladies everywhere and a role model to young single Christian men.

Sean Lowe spoke about his faith in a video for Christian nonprofit I Am Second about those concerns and how he decided to do the show.

Sean Lowe has actually been an active Christian since the 6th grade. He had serious concerns about doing the ABC show known for its salaciousness and less-than-ideal portrayal of a serious monogamous courtship and relationship.

He responded to the notion that appearing on a reality show could harm his testimony as a Christian.

“I wrestled with it quite a bit thinking, ‘I’m pretty sure God opened this door but what if He didn’t?’ … What if I’m harming my testimony by going on a show and dating multiple people at one time, and kissing multiple people? What if people look at me and they say, ‘This is what is wrong with Christianity?’ Look at this guy. He’s professing one thing, and going on TV and doing the opposite. That was a big fear,” Lowe said.

Sean commented that he initially opposed the idea of doing the show due to his faith.

“I said, ‘Listen, I have no desire to be on reality TV and I certainly don’t want to subject myself to all the public criticism that comes along with being on a show like ‘The Bachelorette,’” ….. “Guys go on there, get drunk, and there’s the fantasy suite and there’s sex and nudity. It just didn’t seem like something that represented me.”

“I’m getting over a broken heart and I’m still trying to mend. The first go around wasn’t the greatest experience for me. I said, ‘I don’t know,’” said Lowe. “On the show, bachelors traditionally get raked over the coals. It’s not easy to maintain that good guy image when you’re the star.”

Sean may have been the first contestant on The Bachelorette not angling for a starring role as The bachelor. Perhaps this made him even more attractive to producers who have historically had a tough time finding a Bachelor lead who was serious about finding love as opposed to getting famous.

Surprisingly his very Christian parents encouraged him to go on the show.

In his “I Am Second” testimony, he opened up about his virginity. Sean stated that though he remained a virgin through college, and began having sex after graduation for five to six years.

“I would start feeling extremely guilty afterwards, but after that guilt faded, I would start talking to some other girl and go down the same path of destruction.”

“At the age of 24, I think I finally became a man and I said ‘alright, Jesus, let’s do this again.’ I don’t know who I would be without Jesus in my heart. Jesus shapes the way I think, the way I see the world.”

He claims that now he has held true relationship with Jesus.

“I don’t know if anyone has found Jesus through me talking about not having sex, but I think it’s now certainly more evident than ever that I love Jesus, and that I’m different because I love Jesus.”

Sean Lowe and Catherine Giudici remained celibate throughout their courtship and eventually married in January 2014. He said this about the struggle to remain pure.

“I didn’t give in to my sinful nature. As long as you stay in constant communication with God, He’s going to get you through anything.”

Catherine was baptized in a ceremony at Plymouth Park Baptist Church in Irving, Texas by Sean’s dad minister Jay Lowe just prior to their wedding.

Sean is a born again virgin.

Stassi Schroeder getting her own show?