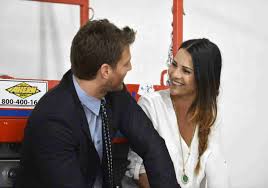 I love how The Bachelor always dances around the issue of religion considering it should be a somewhat important topic to discuss with a would-be-life-partner of 9-weeks. And we are curious if it’s a topic discussed off-screen.

I mean Jef Holm was a hard-core Mormon and Emily Maynard was a hard-core evangelical Christian. Brooks Forester was also Mormon while Desiree Hartsock was Christian. JP Rosenbaum and Jason Mesnick were Jewish. Jake Pavelka was a Methodist. Kacie Boguskie was a conservative Christian. Sean Lowe was a very serious Christian and Catherine Giudici decided to take her Christianity much more seriously after she got engaged to Sean. In fact Sean’s season was the first season that really made a big deal out of ‘faith’.

And this season of The Bachelor it took until the Fantasy Suites to get even the smallest glimpse of the role of religion has played in Juan Pablo’s search for love.

In the shocking Fantasy Suite nightmare episode we saw 26-year-old Buckhead, Georgia criminal attorney Andi Dorfman ask Juan Pablo if he knew what her religion was.

Juan Pablo said ‘no’ and defensively said …’well do you know mine?’ Andi said yes you are Catholic. I originally thought Andi said that SHE was Catholic which was shocking to me because ALL signs point to Jewish and she is in fact Jewish.

More info on her ethnic/religious background….

Her parents are Hy and Patti Dorfman from Atlanta, Georgia.

Here is info on Juan Pablo being Catholic….

We knew Juan Pablo Galavis was Catholic because his mother is obsessed with the Catholic Pope. Plus he is Venezuelan. It’s practically a given. I am doubting Juan Pablo is a hard-core practicing Catholic, but he is Catholic none-the-less.

We know that Andi Dorfman will lead the next season of The Bachelorette and it will be interesting to see if there is any on-camera discussion of religion considering she voiced that it was so important to her.