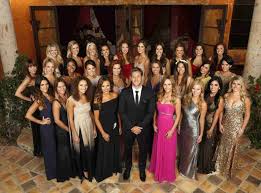 Tomorrow night Juan Pablo faces 17 of the season’s bachelorette cast-offs on The Women Tell All, and it should be interesting because Juan Pablo Galavis has been one of the most controversial Bachelors in Bachelor history.
Even Bachelorette favorite 29-year-old Jef Holm claimed that he had met many of the women from JP’s season and that no one had anything good to say about him. He even accuses Juan Pablo of just being on the show for fame.
So Monday he will be confronted by these women including Sharleen Joynt who explains her reasons for leaving the show and Andi Dorfman (NEW BACHELORETTE BTW!) cross examines Juan Pablo yet again over his bad behavior in the Fantasy Suite in St. Lucia.
Andi is even seen talking directly to host Chris Harrison, she even states that she “closed her eyes and waited for it to be over.”
She also says:

“We all came here looking for a husband. Very seldom did you use the word wife,” Andi claims “and I don’t know if it’s you weren’t looking for a wife and I think a lot of us are on the same page as far as you not really taking the time to get to know us.”

Juan Pablo blasts back: “funny” , “I wouldn’t waste my time. At the end of the day, I took this very seriously. It is what it is.”

Surprisingly Andi does defend him later about claims that he favored two contestants who are single mothers, Renee and Cassandra, over the other ladies.

“I hear people say he was favoring these special people and that kind of bothers me. I was just saying to Renee, it’s not him putting Cassandra and Renee above us,” she explains. “I think he just saw them differently. A perfect example of that was Cassandra. The minute he didn’t see it with Cassandra, he felt like she should go home.”

The Bachelor‘s Women Tell All special airs Monday, March 3, at 8 p.m. on ABC.

Newlyweds Sean and Catherine will make a cameo as well.  The women doubt Juan’s reasons for choosing to lead the show. The women claim that JP used his daughter Camila to manipulate situations.

The women in attendance were everyone who made it past night one, minus Nikki and Clare and Amy Long (who is dating Brooks Forester BTW!), who didn’t show. Kylie Lewis and Lauren H also attend.
The 17 women in attendance: Chelsie, Andi, Sharleen, Kat, Alli, Kelly, Lauren S., Elise, Renee, Lucy, Danielle, Chantel, Cassandra, Christy, Victoria, Kylie, and Lauren H.
The Bachelor‘s Women Tell All special airs Monday, March 3, at 8 p.m. on ABC.