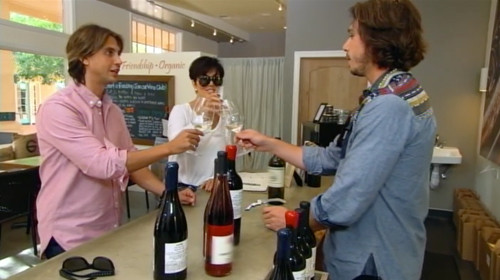 The problem with 15 minutes of fame is that it can be addictive and sometimes reality stars want to extend their 15 minutes into 30. So 31-year-old ’Bachelor’ star Ben Flajnik’s ‘tight’ and blossoming relationship with 58-year-old Keeping up with the Kardashians star Kris Jenner may appear to some to be opportunistic.

BTW, one reason that I think there may be some truth to this rumor is that Ben was at a lot events during the filming of Keeping Up with the Kardashians, but was edited out. He was at Kanye’s concert in Oakland for one, and with Kris Jenner shopping prior to Kanye’s big proposal to Kim. If the relationship was strictly for publicity he would not have been edited out of the show.

According to the March 31st print edition of In Touch magazine Ben is using Kris to promote his career. I know….whaat?! That would never happen in Hollywood would it?

In this week’s In Touch, a source reveals:

Also keep in mind per our professional assessment Ben is an enneagram 4 and 4s will do things just for the experience…trust me I know. Ha ha! So it may be less about opportunism and more about FOMO.

In January, Kris’ sister, Karen Houghton, also told the mag Kris’ real motive behind being spotted with Ben was publicity. No big shock. Kris is a publicity genius.

“I texted her about Ben the Bachelor the other day and asked if they were dating,” Karen said. “She said it was more of a business deal.”

Hopefully Ben will appear on the upcoming season of Bachelor in Paradise, so we can get to the bottom of this situation!

How to donate car for tax credit in California 2013

What is Kristen Taekman's net worth?