What do Josh Murray’s tattoos mean? 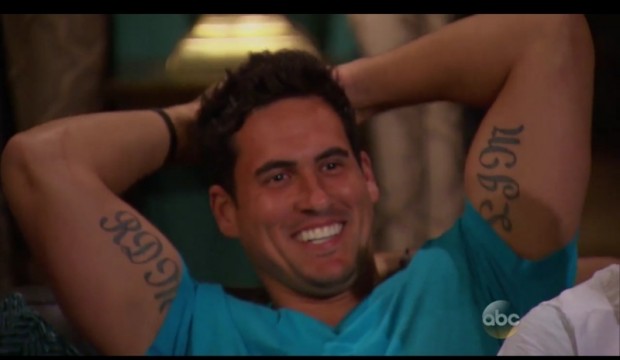 The tattoos are always such a BIG question every season of The Bachelor/Bachelorette and we do our best to get to the bottom of them.

We know that 29-year-old Josh Murray has a total of 3 tattoos. Two of them are sets of initials.

So what do they mean?

Initials are always a little scary because they could mean an ex-girlfriend!

Soooo, we see he has a tattoo with the initials RDM and the initials LJM. So my first thought is that these are initials of family members (especially because brother Aaron’s tats are family member initials), but his father’s name is Dennis so does this mean dad goes by his middle name?

It took a lot of searching but I found a home purchased by a Robert Dennis Murray, Jr. and a Lauren Murray in Tampa which leads me to believe that dad’s first name is actually Robert and that he is a Jr., thus he goes by his middle name Dennis.

I still have not located mom’s middle name but have located her middle initial and it’s a “J”!  So that tattoo is mom and dad! Little brother Aaron also has a couple of tattoos with the family’s initial’s.

Josh was NOT kidding when he talked about how close he was to his family. We keep uncovering evidence to clearly support that claim! Josh actually moved to Atlanta to be close to his brother Aaron and sister Stephanie soon followed. The three even lived together over the summer in a 3 bedroom apartment!

What really happened between Ben and Courtney in Puerto Rico?