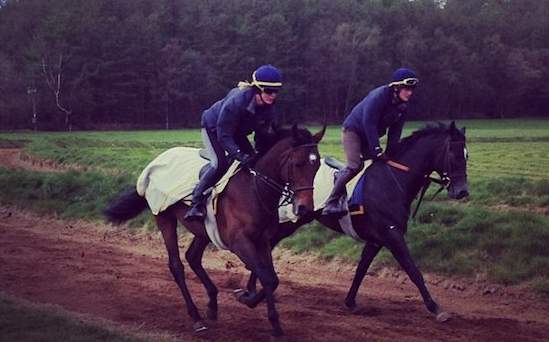 Ladies of London star Annabelle Neilson never does anything in half measures. She was a world class model and muse to designer Alexander McQueen for years. But she was also a world class equestrian. She started riding at 4 years old up until the age of 16 but then took a long break. The star was in a serious horse riding accident as seen last week on Ladies of London (August 2013) while she was training for a charity race at Goodwood, England.

After two months of training, her horse, Whinging Willie was spooked by a car causing Annabelle to fall.

Goodwood’s charity race at Ladies’ Day would help raise money for the charity Water, which sponsors a school in Ethiopia.

We saw tonight that the injuries were quite serious causing her to be bed ridden for 4 weeks, but also that Annabelle was quite determined to heal herself.

Neilson said in August of last year. “I am determined to take part in next year’s race.”

This certainly isn’t the first bump in the road for the 45 year old British model.

Her best friend, fashion designer Alexander McQueen tragically took his life on February 11th, 2010 and she went through a very difficult divorce with banker Nathaniel Rothschild 17 years ago. This girl is one tough cookie. She can handle any situation!