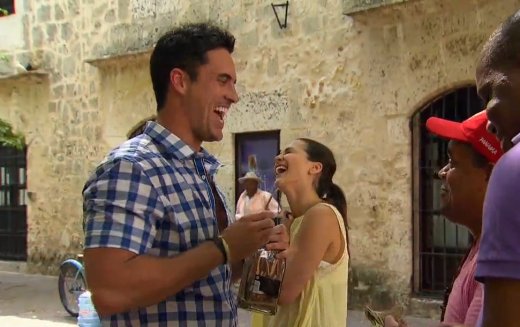 No episode is more anticipated and talked about on The Bachelorette than the coveted Fantasy Suite date–especially after the big ‘anti-climactic’ Fantasy Suite episode on Andi Dorfman’s season of The Bachelor where Juan Pablo told her she “barely made it”!!!

So this years Fantasy Suite episode begins with Andi on the beach in the Dominican Republic reflecting on her final three choices—Nick Viall, Josh Murray, and Chris Soules—”I’ve got three great choices, three very different choices” ….. “There’s three different paths in front of me right now.”

Nick and Andi take a helicopter ride to a private island where Andi inquires about Nick’s past painful break-up. After talking to Nick’s family during Hometowns, Andi learns that the break-up was much more difficult than he let on. Nick concedes to being a serious mess after one break-up in his 20s, and to feeling “bruised” when his engagement didn’t work out.

FS dates are often when the “I’m in love with you” declaration is professed from the suitor–to which the lead is not “legally” allowed to respond with a mutual declaration of love. It’s also generally when the scrapbooks, collages, and hand-drawn fairy-tale book’s emerge to solidify the connection–clearly not facilitated by producers (I always wonder what sort of scrapbook supplies producers bring on these trips!!)

Anyhoo, Nick is certainly creative and charismatic and tells a great story in his hand-drawn fairy-tale book. (I wonder if he made the book while she was on a one-on-one with Josh!!!)

Of course Nick has ONE thing on his mind–FANTASY SUITES!!!

And luckily Andi indulges Nick in some FS time after he says: “I love you, Andi. I’m really in love with you,”  Andi proclaims “I feel hopeful and safe, and I feel like when Nick looks at me, he sees every part of me—my heart, my mind, my soul.”

The two decide to forgo their individual rooms and stay as a couple in the Fantasy Suite! Heyoooo!!!

I will NEVER look at the Fantasy Suite date the same again after Courtney Robertson’s tell-all book detailing how ABC fails to provide the couples condoms!–major party foul ABC!

The next day (after a night of Fantasy Suite love with Nick–this is why the show is so amazing), Andi meets up with Josh in Santo Domingo. Andi sets up a baseball game with the local kids and Josh is in heaven. The two spend the day exploring the Dominican Republic capital city finding some exotic treats.

It was pretty cute to see how excited Josh was to buy a bottle of the island’s famous aphrodisiac, Mama Juana. I’m guessing the two enjoyed that in the FS.

Josh tells her he “loves her” again and again and I love that he says “I know you can’t tell me anything but that’s Ok”–again this is why this show is soooo great! One week away from choosing a life partner and you legally can not tell them you love them!!! It’s sheer brilliance ABC!

“The way I feel for Andi, I’ve never felt before in my life” …. “It’s a great feeling. I’ve waited 29 years for this feeling…I am totally in love with Andi. It’s gone through the roof. I don’t know what’s beyond love, but that’s where I’m at.”

At dinner Andi expresses concerns about how serious he is which translates to: she is seriously in to him. She needs to know he can be “serious about getting down on one knee.” The two discuss parenting at dinner–important questions for deciding a life-partner of 9 weeks! MUCH better than last year! PHEW!!!

And I bet Josh, unlike Juan Pablo, DID ask her about her religion and political views. You can’t deny how cute these two are together!!! I’m on team Josh!! Luckily Josh passes the test and gets time in the Fantasy Suite.

Conservative Andi dons a two-piece bathing suit for the first time!–I suspect egged on by producers to show a little skin.

As a side note: This is allegedly the episode where Andi gets knocked up!!! I’m afraid that rumor may not be true but God it would have been amazing if it was! Talk about a situation!

Then sweet Chris. Andi takes him to Rancho Peligro, where they go horse riding–little does she know he’s afraid of horse! She talks about the hometown date and how much she liked his family. I’ve gotta be honest though–last week seeing Andi arrive on Chris Iowa farm it was OBVIOUS that girl is not gonna be a homemaker in Iowa. I knew his hours were numbered. That’s why the whole date was so hard to watch.

They talk about whether Andi could ever live in Iowa or whether Chris could move to Atlanta. The writing was on the wall!

As a side note: I love the Live Twitterverse during the show. Producer Robert Mills aka Millsy let us know: “Tonight’s #Bachelorette has the best and most emotional exit in years and it happens early. Don’t miss a minute.”

Andi can not hide her feelings. She breaks into tears knowing she has to dump Chris:

“I don’t think it’s fair to make you sit here for days and wait for a rose ceremony” … “I just think I’d rather be honest with you and tell you that I’m trying and I’m trying but it’s not there…Every part of me feels that I’m an idiot for not being able to reciprocate [your love]. Because look at you. Look at the type of person you are…My head and heart don’t match up.” Chris is devastated and claims in his ITM that he didn’t see the end coming. “I just had my heart broken and I put everything out there,” …. “I’m just sad, disappointed. I do have some questions as to what the hell just happened.”

I suspect this also has to do with the fact that she just had an amazing FS date with Josh Murray. There is no denying those two are IN LOVE. That probably made it impossible for her to even pretend Chris was in the running. It’s epic. Chris proved to be a consummate gentleman and he clearly has a great chance at being the next lead, but can he get over Andi in time, and can any girl live on a giant grain farm in Iowa!!!? 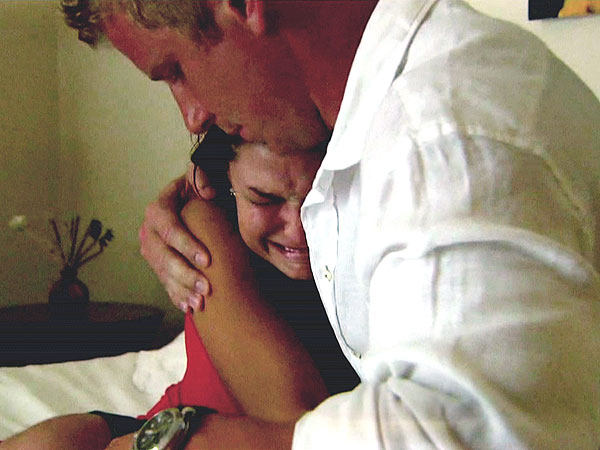