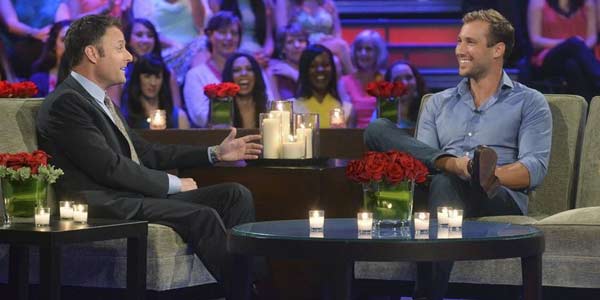 Tonight we got to see Bachelorette Andi Dorfman confronts the men she sent home on The Men Tell All.

One thing I found interesting about this cast was how IN to Andi these guys really were. I was really expecting that most of these guys were angling to be the #2 guy in order to land the lead in The Bachelor 2015. I thought how could guys like Marcus Grodd and Marquel Martin and Chris Soules that are soooo hot be so upset about a relationship with Andi not working considering all the attention they will get now! But these guys were really in it to win it! But first the show kicked off with a Bachelor FIRST! First ever on screen ultra sound for former Bachelorette Ashley Hebert and husband, J.P.

I just felt so much second-hand awkwardness and anxiety for the ultra sound tech. I could see how nervous he was to perform his skills for a live audience. Cameras on cranes, boom-mic operators, bright lights, no pressure, but you better give us one of two answers…”boy” or “girl”, and you have about 40 seconds to do it!

Penny Farthing has a running joke about why no one ever says Congratulations on your ALL human baby. It’s always about a baby “boy” or baby “girl” but everyone assumes the baby is all human. Why? Part of the enneagram “one” anxiety is that she could one day carry a baby that may not be ALL human–could be a Centaur.

So as the tech performed his duties I was looking at the image and waiting to see signs of a Centaur, but the expert appeared to believe this was a boy and was ALL human! PHEW!!!

Congratulations JP and Ashley!!! And Bachelor Nation! We are pregnant AGAIN!

So back to Andi Dorfman….Harrison begins the show by addressing tabloid rumors that the Bachelorette got knocked up in the Fantasy Suite.

So the men were introduced all cloaked in man-scarves. I guess ABC finally acknowledges the ridiculousness and pervasiveness of the man-scarf on the show—something we have been commenting on for years, but I’m not sure the audience got the joke.

Judging by Andrew’s defensiveness I suspect he is guilty as charged. He seemed to be very concerned about how the allegations were affecting his reputation more than he was about apologizing.

“The allegations you’ve made affected my job, my personal life,” Andrew told J.J.

But Marquel seemed much more concerned that he was stuck in the “friend zone” with Andi and that he looked like a “square” on national TV then about whatever Andrew said under his breath. He then made is Christianity and faith in God very clear.

Luckily Marquel is headed to Bachelor in Paradise!!! –which judging by the cast members from the show may have been a little less than a “paradise” and more of a “situation”.

Marcus took the hot-seat next to discuss his heartbreak. He looked a little bummed, but I think he is “less” bummed after his 3 weeks in Tulum Mexico. The bottom line is that Marcus was just too “nice” for Andi and maybe a little too injured. Andi likes guys who are a little rough around the edges. I don’t think she wants a guy who is that emotional, but don’t worry Marcus…a lot of girls will!!!! And you have ALWAYS got an amazing career as a stripper to fall back on.

The ladies went crazy for Hot Farmer Chris Soules. He was there–still heart-broken.

The next most awkward moment of the evening was a random audience member who interjected asking Chris Harrison if she could meet Chris. Did producers cook that up? Who knows, but it certainly was awkward! I’m not entirely sure Chris was “feeling” the surprise guest but she was “feelin’” him!!! No pressure Chris…during the commercial we are going to put you guys on a “speed date”. But something tells me that did not go anywhere.

Andi then took the stage, to answer questions from Chris and Marcus.

Chris wanted to know….“What changed your mind after home towns?”

This, in my opinion, is where Andi had an easy out but she didn’t take it. She could have easily blamed Iowa. Instead she said: “I didn‘t see the foundation to even get to Iowa.”

Marcus then asked if he was too open.

“It made me feel hopeful,” Andi said. “Towards the end, I wasn’t on that page.”

Then Chris Harrison busted out a manila envelope which contained the results of the lie detector tests from a previous group date–he also said something creepy referring to said tests “Daddy’s got it…” (It’s O.K. CBH I’ll give you a pass on this one).

He hinted that Josh Murray had lied twice on the test and asked her if she wanted to know the results. You could tell this was absolute torture for her, but in the end she is an enneagram one and always does the “right thing” and the right thing was to trust the guys. But I guarantee behind the scenes she is grilling Josh about those results.

So one more week Bachelor Nation and we will officially know if she chooses Josh Murray or Nick Viall!!! Who do you want to see her with?