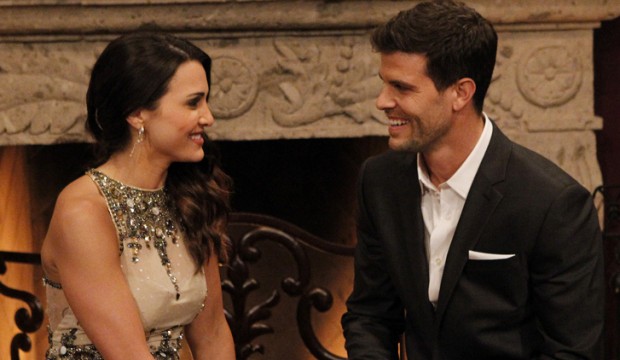 We know to some degree that The Bachelorette is scripted or shall we say “produced”, but we love it anyway and we really love those occasional off-the-cuff moments when things actually get “real”.

In fact one of the most interesting things about The Bachelorette is not really what happens on screen but what happens off camera. And tonight when the show had to handle an unprecedented situation—letting Andi Dorfman and her remaining suitors know about the death of contestant Eric Hill after their hometown dates, we definitely saw the 4th wall come crashing down.

As producers, camermen, boom mic operators, key grips, PAs, everyone rushed in after Chris Harrison broke the news to the stars. We have occasionally seen a boom mic operator get caught in frame trying to break up a fight or rescue a girl who threw herself down a flight of stairs, but never have we seen the whole troop rush in to handle an impromptu situation of such a serious magnitude.

Tonight we saw producers Elan Gale, Robert Mills (Millsy), Cassie Lambert and Peter Scalettar and the rest of the production crew all break protocol and rush in to frame to comfort the cast.

And I gotta say, those are the moments that make you realize for all the scripting and “producing”, the show is “real” and deals with real people.

You could hear Andi say she didn’t want to go on…as in this event was too much and it was heart-wrenching.

And super cute and sensitive Marcus got up and ran outside to shed some tears. Andi followed him. The other guys, Josh Murray and Chris Soules sat stoic trying to keep a brave face, but reached out to comfort producers as they entered frame.

All in all it was one intense situation.

I have felt nothing but empathy for Andi this whole time. I know this would be tough for anyone but knowing she is an enneagram 1 I knew the news would be  almost unbearable. Ones are plagued by guilt over everything and no matter what people may have thought of her blasting Eric for calling her fake, I knew she was a person who took her responsibilities SO seriously and would feel a ton of guilt as a result of her last conversation with him.

So needless to say, it was really tough to see the Bachelorette and her remaining men grapple with the shocking news.