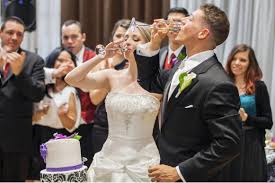 Well lucky for us no one on this show apparently read their contracts because we have some compelling evidence to suggest two of the couples are still together!

Married at First Sight sounded like the most absurd idea ever for a dating show especially since we have seen how a show like The Bachelor can’t even create lasting relationships and they give the lead 25 potential suitors to choose from!

The FYI network decided to match up 6 random strangers and have them “marry at first sight” and see if the relationship could work after 5 weeks.

But I think the new FYI network hit a homerun with this unconventional show and matched up at least 2 pretty successful couples.

One of those couples is 26 year-old Cortney Hendrix and 27 year-old Jason Carrion. Cortney is a Burlesque Dancer from New York City (originally North Carolina) and Jason is an EMT from Brooklyn. Immediately Cortney lets Jason know that both her brother and father are firefighters and that Jason’s job makes her like him even more.

The two hit it off immediately. In fact you would never know that they just met.

And last week while looking at their wedding album Cortney said:

“If there was an outsider looking in, we could show them those photos and they would never know that we had just met each other.”

The two are definitely attracted to each other but they are still in “the honeymoon” phase and there is a lot they still need to learn about each other.

“There’s so much stuff that we still don’t know about each other,” …. “Like religion, family, kids, things you need to know in order to make a decision after five weeks of marriage.”

So now that we are getting close to the end and the two still seem really pleased with each other, fans are curious if they are still together or not. And on tonight’s show Cortney talks about taking Jason home to meet her parents. Well it looks like these two lovebirds did head to North Carolina together and  just last month even, 3 months after the show wrapped.

On July 2 Cortney posted to her Facebook fan page that in less than one week she would be enjoying North Carolina aka her hometown.

And on July 1, Jason posted on Twitter that he was headed to North Carolina.

Yes, as of now these two are very much together. Jason recently posted this picture to commemorate their 2 year anniversary. 4 thoughts on “Are Cortney Hendrix and Jason Carrion still together?”