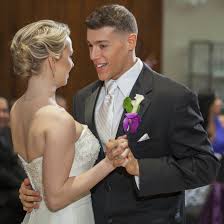 Tonight the 3 couples who engaged in FYI’s controversial reality series ‘Married at First Sight’ had to decide if they wanted to stay married or get divorced. One of those couples is 26 year-old Burlesque Dancer from North Carolina Cortney Hendrix and 27 year-old EMT Jason Carrion from Brooklyn. And the shows youngest couple decided…..

Jason claimed he always chose the wrong women as in women who cheated on him. Cortney also claimed she’d been dating a string of men who cheated on her. The two were immediately very attracted to each other physically, but as time went on they realized that they actually really liked each other.

“We’ve gotten a lot closer,” Carrion says in a NY Post interview, “I gave her my heart, and since then everything has been perfect.”

Jason and Cortney have moved into an apartment in Park Slope in northwest Brooklyn.

Cortney’s parents were understandably skeptical of the experiment and refused to attend the wedding, but now are planning a couple’s shower in North Carolina for them.

Jason’s mother passed away a few months ago and Cortney met her the night before she died. “She was able to leave peacefully because she knew her son was going to be taken care of,” Hendrix says.

We knew that the two had seen each other since the show finished taping via social media. But it is nice to confirm that these two have definitely decided to stay together!