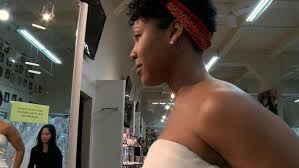 In an interview with s2smagazine.com Monet Bell 33, the product development manager in New York City who starred on FYI’s show Married at First Sight answered some burning questions about where she is at now and if her and Vaughn Copeland ever made up after their somewhat disastrous marriage. The show was rather ambitious. Matchmakers believed that they could find compatible matches for people sight unseen and they did an excellent job because 2 of the 3 couples decided to stay married. But unfortunately Monet Bell and Vaughn Copeland were not so fortunate. The two butted heads almost from day one despite having excellent sexual chemistry. And in the end decided to end their short marriage.

In fact this couple gave it up for each other on the first night unlike Jamie and Doug who still had not had sex at the end of the 5 weeks.

Here are a few of the questions asked by writer Tracy Scott:

“Tracy: Are you dating now?
Monet: I went out on a date, I want to say, Sunday, and that was interesting. I’m not ready to jump full force back into it, but I’m getting my feet wet. I actually really feel like I’m going to meet the right guy for me. I’m going to chill out for a while. For some reason, I really feel like I will fall in love and it’s going to be sooner than later.”

“Tracy: Where are things with you and Vaughn now?
Monet: We’re really good. It’s interesting because we spent all this time arguing and fighting. Then, they put is in a van to the airport together alone. We actually needed that. That was the first time we could actually say, “I’m sorry” to each other. “Though we know we weren’t a good match, do we have to be this mean to each other?” I want Vaughn to be happy. I really want good things to happen for him, and I think good things will happen for him.”

“Tracy: So, would you do a spin-off show, like “Monet Wants a Man?”
Monet: I would be open to it. I wouldn’t do “Married at First Sight” again, but I am still looking for love. I’m not scorned. I’m not bitter. I’m not jaded. I still want all the stuff I wanted. I can have that one day.”

PHEW!! Glad to hear that Monet is not bitter and most of all that she is not camera shy! Hopefully we will get a spin-off!