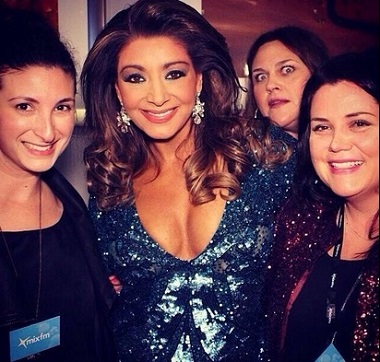 The Real Housewives Of Melbourne aired in the US this summer in early August (although Bravo gave them a horrible time slot–noon on Sundays). So it’s no wonder the show flew totally under the radar. In fact, I only found out about via On Demand–nice advertising Bravo!

And the show was pretty good for a first run, but there was definitely one stand-out star and it was 47-year-old barrister, Gina Liano. The straight talking, hot-blooded, single mother of two stirred the pot with her Aussie pals like a seasoned pro. In fact, my favorite quote from her is, “I am a lawyer, I only deal in facts”.

So according to New Idea magazine it looks like the South Yarra star is headed to Southern California to join her Beverly Hills counterparts on The Real Housewives Of Beverly Hills.

Gina connected with Lisa Vanderpump on social media and met up with her in July in Los Angeles and costar socialite Brandi Glanville in reportedly very nervous–I bet since she just bought a house!

“Brandi is particularly vocal about it and has been saying there’s no need for another Lisa [Vanderpump] on the show,” a source told New Idea magazine. “Lisa’s really stirring the pot and loves the fact her co-stars are freaking out over Gina.“All those women are fiercely protective of their turf, and no one wants another mouthy newcomer – especially one as good-looking as Gina – to be stomping on their ground.”
Of course it would not be a shock that Lisa is trying to move Brandi out and someone new in…especially someone who could be a powerful alliance to her. I think Gina will make a SERIOUS value-add to the show. Not only can she start a situation, but she can finish one like a pro!
PS: Remember her secret ex-boyfriend of 8 years, Dean Giannarelli lives here in the states so perhaps he will appear on RHOBH!
Photo Source: Instagram