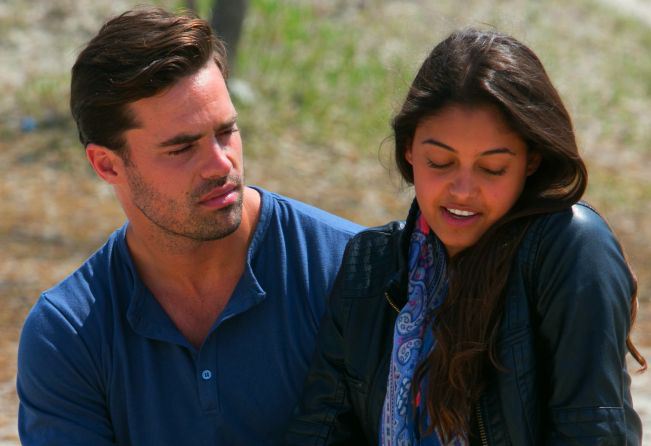 In the first part of the two-part Bachelor finale that aired on City Tv last Tuesday winner April Brockman, 27 had an epic meltdown in her Moorea hotel room the day before the proposal from Bachelor Tim Warmels, 28. It looked all but certain that she would walk-off the show (thanks to the City Tv production crews editing).

April claimed that she wanted to “go home” as a result of all the “pressure” she was feeling. But low and behold April woke up the next day and felt “clear” (which I am sure meant there was a serious 24/7 emergency producer intervention) and the two got engaged!

Now that the show has taped she and Bachelor Tim can give us some insight into what transpired behind the scenes.

April shed some light on the situation in the Toronto Star yesterday.

“I was doing really well up until then and we were in the most beautiful place on Earth, and it was just very stressful and so it all came out there a little bit . . .”

And since the couple of few words does not like to finish sentences Tim jumped in and picked up where April left off.

“I think what most people don’t get is that to get to an engagement in six weeks . . . you have to be a little bit crazy to do that,” ….. “I’m not necessarily a sane person in a lot of different ways. I quit a very high-paying job to do my thing” — (Tim quit a lucrative job as an investment banker to become an entrepreneur) — “I’ve said no to a lot of things in life and so I make decisions in ways that not a lot of people do.”

He goes on to say to April….

“And, you know, for you to get, babe, to that place is a very different thing than it was for me.”

Tim also makes the astute observation that we viewers saw a very edited and simplified version of their relationship.