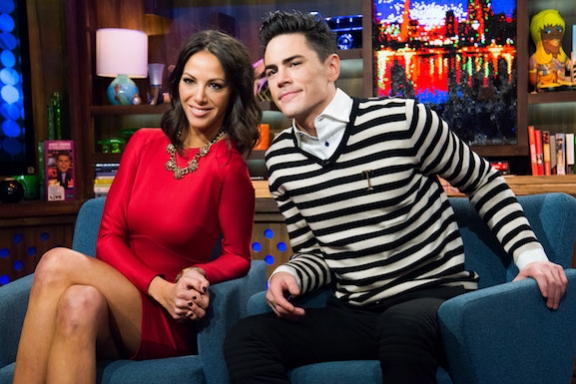 The good news about Vanderpump Rules season 3 is that there is actually still some real drama, especially in regards to Tom Sandoval, Kristen Doute and Ariana Madix.

So Kristen Doute is still really (and by really, I mean not acting) obsessed with ex boyfriend Tom Sandoval so she produces another reason to see him–the epically awkward mail exchange. FIRST, Kristen makes sure that Ariana will not be there by paying her a little visit.

THEN, Kristen gets all dolled up to go and get her mail from Tom, curling iron and all. Boyfriend James Kennedy seems a tad jealous of all the primping Kristen does for this business exchange.

Kristen heads to Tom Sandoval’s apartment to get her “mail”, and she was disappointed to see that Tom had friend Tom Schwartz there as a bodyguard and witness to protect him from Kristen.

Kristen starts by accusing Tom of not “responding to a single text”, and then grabs her phone to show him.

Tom asks her to leave him and girlfriend Ariana alone. Kristen responds:

“When things start off badly and dishonestly, they’re not going to end well.”

Tom angrily tells Kristen about his relationship with Ariana:

“We are so happy together Kristen”….”I felt trapped with you”…..”I just don’t want to be around you Kristen”.

Tom is exasperated after she finally leaves and says:

Here is an extended scene of the situation…..

Well I hope someone made a trip to the post office to fill out a “forwarding mail address” form! Actually I don’t…I live for these awkward exchanges….I hope there are more!