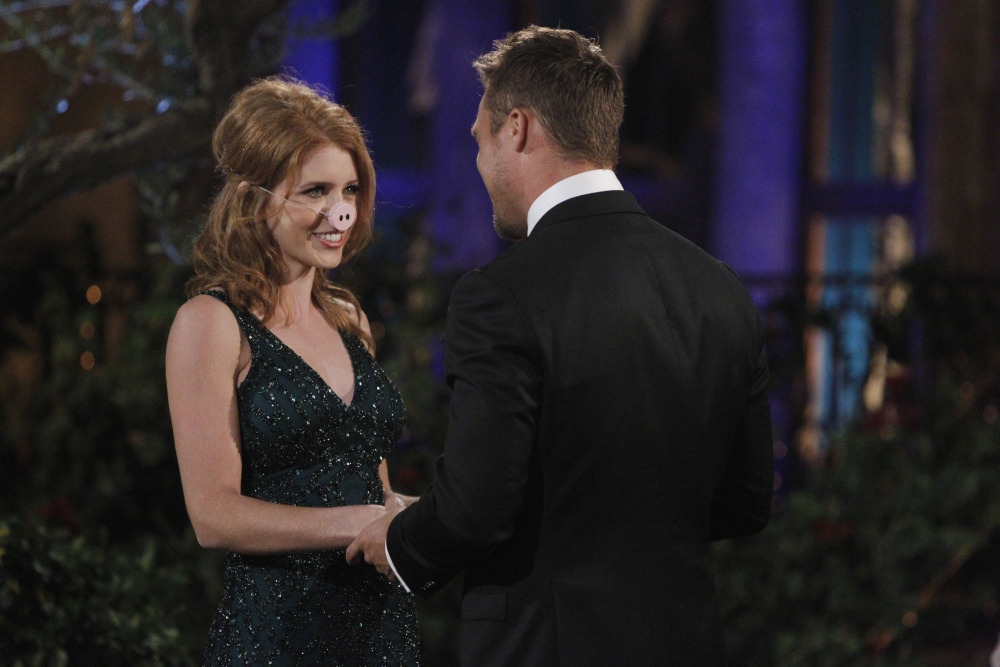 Last night Bachelor Season 19 premiered, the driveway was freshly hosed and Bachelor Chris Soules met the ladies who will be vying for his heart and his final rose. And there were a LOT of them! Chris’ head must have been spinning because mine sure was. And Chris received a rare bonus of 5 amazing ladies for a total of 30 instead of the standard 25–I don’t know if that’s really a plus or a minus. It was just limos and ladies all night long.

Chris was observably nervous last night especially in the 3am rose ceremony. So here are his thoughts on the ceremony from his People blog.

First was the infamous hug from model Britt Nilsson…

“When that first limo pulled up, I took some deep breaths and tried to settle my nerves. The hug from Britt definitely helped. And yes, it really did seem to last forever. But I can’t put the hug only on Britt. The truth is that I really am a hugger. Always have been. Turns out so is Britt. Put two huggers together and what do you get? Yep, the longest televised hug in history. It really was a nice moment we shared, and I think it helped put both of us at ease.”

Then there was drunk Tara…

“Now I knew some of the women were going to show up doing crazy stuff to get my attention, and sometimes it worked. Tara was memorable both times I met her, with and without her Daisy Dukes! However, nothing could have prepared me for what Kaitlyn said. Wow, she really had me tongue-tied.”

Remember there was quite a bit of time between the first crop of 15 women and the second. In fact Chris genuinely believed that he was only getting 15 women to choose from.

“After meeting 15 women, I was already feeling a little dazed. I’m not used to dating more than one woman, let alone 15. When Chris suggested I head inside, I didn’t hesitate. I didn’t know if more women were coming or not; I just wanted to get inside and start getting to know the women who were already there.”

Then the first impression rose was delivered…..

“When it was finally time to hand out that first impression rose, my head was spinning. So many choices! Whitney had impressed me with her beauty and poise, Kaitlyn had killed it with her humor and her dance moves, and countless others like Carly, Kelsey, Tandra and Ashley I. had me thinking maybe they should get that first rose. Ultimately, I gave the first impression rose to Britt, who not only gave me the best hug of my entire life but also really made me feel comfortable on what was a pretty stressful evening.”

And then the final roses….

“And then it was time to hand out some roses. To be honest, I couldn’t remember everyone’s name. It was almost too much for me. I guess I thought Chris would be there next to me with a little cheat sheet or something. But no, I was on my own. More than anything, I just didn’t want to make a mistake and send my future wife home on the first night.”

And then there was drunk Tara….

“As I handed out the roses, I started noticing Tara. I could tell she was a little shaky on her feet and that she had probably had a few too many drinks. I must admit it was a little disappointing to see her so out of it, but I’m no choir boy, and I’m the first person to admit that we all make mistakes. Tara also seemed fun and cool, someone I wanted to get to know better. Ultimately, I gave her a rose, and I don’t regret it.”

“No choir boy”…thats for sure. Chris already has an arrest record for DUI’s. So no wonder he went easy on Tara. We will have to wait until next week to see what happens with Kimberly who refused to follow producer directions and exit the mansion. Chris will have to decide whether or not to give her a second chance.