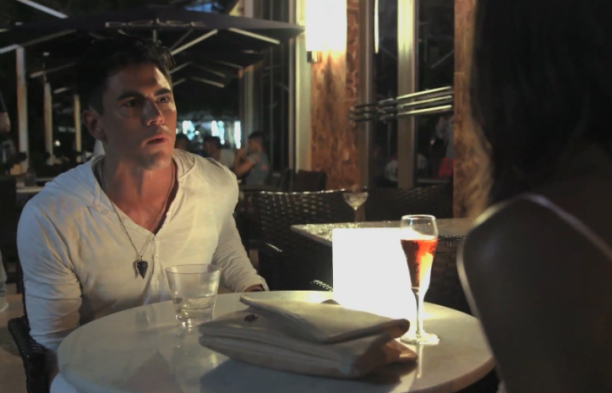 Monday night Tom Sandoval finally indulges Kristen Doute in a heartfelt exit interview to discuss their failed relationship in Miami. Both break down in tears and shockingly Tom concedes how difficult the break up was for him despite his very successful new relationship with girlfriend Ariana Madix. So Kristen now explains her reaction to the conversation in her Bravo blog:

“As dramatic as this episode was, we really did have an amazing time in Miami ……. I won’t deny the occasional (and admittedly immature) dirty look or side comment towards Ariana, but we both played it the same way…… For someone who’s so above me, she certainly spends a lot of time talking about me. The victim game she was playing with her crocodile tears in the cab blew my mind. Are we watching the same show? She seemed to be doing just fine while dousing herself with chardonnay on the boat the day before.”

Kristen goes on to talk about how much friend Katie hurt her in Miami:

“It really bothered me to hear Katie knocking me in order to raise Ariana’s spirits. If only she could walk a block in my shoes and Schwartz cheated on her then left for someone else who she was forced to be around, I’m sure she’d be singing a very different tune.”

As to seeing Tom cry she said:

“It’s not that I enjoyed seeing Tom cry, but I was glad his hard shell had finally cracked. ….. When I dated Tom, I didn’t have a lot of self worth and was extremely insecure. I wanted validation from him that I wasn’t the only one who had a hard time with our breakup. Clearly Tom and I had both been drinking and allowed ourselves to be vulnerable during that conversation. I was hoping for a friendship with Tom post-conversation, but I’ve come a long way (light years) regarding my feelings about Tom since Miami and will catch you up at the reunion!”