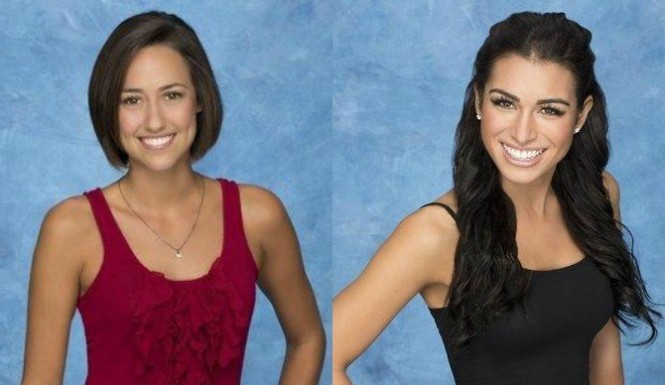 So I think this is a Bachelor first? Two girls BOTH send home on a 2 on 1! Tonight’s episode of The Bachelor pits 26-year-old nanny/virgin from Wayne, NJ, Ashley Iaconetti against 28-year-old Michigan Guidance Counselor Kelsey Poe in an unprecedented 2 on 1 smack-down and BOTH are sent packing.

Kelsey Poe narrowly escaped elimination last week with a Hail Mary emergency paramedic maneuver. Her earlier strategy of delivering a sad diatribe on the tragic death of her ex husband Sanderson Poe did not work (not sure why), so she had to go to plan B.

Throwing herself on a floor and hyperventilating in the middle of the rose ceremony–(still not as impressive as Tierra LiCausi throwing herself down a flight of stares).

Regardless, it was certainly awkward.

But I guess the move worked because Kelsey gets a 2 on 1 with Ashley Iaconetti. The 3 of them enjoy a helicopter ride over Mount Rushmore, and land in the middle of the Badlands.

Unfortunately that maneuver did NOT work and Ashley is sent home later. But not before she confides in Chris that Kelsey is fake. Chris tells Kelsey about the info from Ashley and she starts crying. Ashley in turn confronts Kelsey. Chris looks miserable the entire time and both girls get the boot.

So we had our first ever DOUBLE ELIMINATION SITUATION!

1 thought on “Ashley Iaconetti and Kelsey Poe BOTH sent home on 2 on 1!”