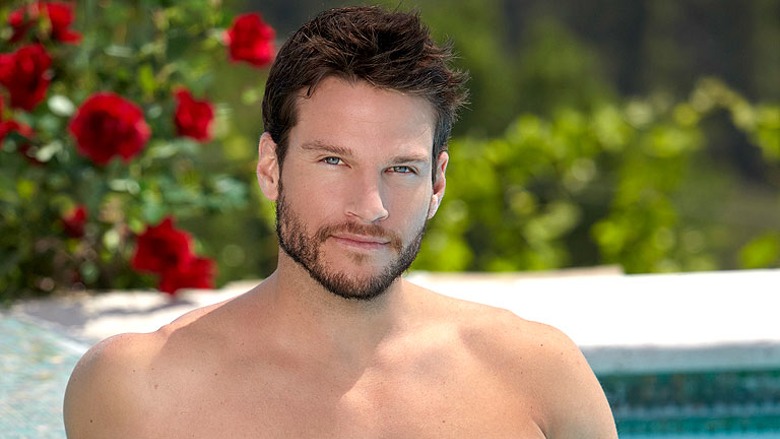 Wow, I had NO idea 33-year-old Winemaker and ex Bachelor star Jesse Kovacs was appearing on Bravo’s Millionaire Matchmaker tonight!

“I think Jesse is a really goodlooking guy,” Patti Stanger says. “He doesn’t know how to be a gentleman. He’s being a total ass. I need to get deeper with him so that he could make the first step toward a relationship.”

He famously bagged on Bachelor in Paradise contestant Lucy Aragon after hooking up with her and called Christy Hansen a “dumb blonde.”

I really like Jesse because I met him in person and he was really nice to me. (I am easy to impress — Ha ha ha). We crashed a Bachelor event here a few years ago in La Jolla where he was promoting his wine at his then new wine bar Blended Industries in La Jolla which he ran with then girlfriend Summer Albertsen who was also smokin’ hot and very nice.

Anyhow, after they broke up Jesse famously appeared on Bachelor in Paradise where he came off as a total ass unfortunately. So tonight Patti Stanger swoops in to the rescue. She grills Jesse about being a ‘total ass’/ douchebag and asks if he thinks women are subservient to him? And Jesse kind of admits that he does. He also admits to doing a lot of ‘hitting and running’ with ladies.

He then went on to discuss his ex girlfriend Summer whom he dated for 4 years. He said that she was very business oriented — which she was and we witnessed first hand. She was really working hard launching her fashionista/professional styling career in La Jolla.

Summer was a very pretty, blonde, California girl with a perfect body–exactly the type of girl you would picture Jesse with. This was the last serious relationship that he was in. In fact the two even lived together in Poway (way too suburban for Jesse).

He said that they broke up because she did not like him traveling all the time and that he was ‘fine’ after the break up. OUCH!

And then sadly he claimed that no one had ever ‘broken his heart’.

Bad news for Bachelor Pad season 1 contestant and ex Elizabeth Kitt , (Elizabeth Kitt is now married to Ty Brown BTW), and all of the ladies that Jesse has dated!

Patti creates a mock dating game for Jesse to play where he can not see the ladies that Patti has chosen for him. For Jesse, Patti picks Kylie, a ballerina, Natalie, who has an organic cocktail company and Kate, a model.

Despite the fact that he can not see the girls, Jesse still manages to choose a blonde model (Kate) and the two go go cart racing

The two then go out for some wine and discuss how much they like each other. They kiss and Kate tells Jesse that he gave her butterflies and the two high-tail it out of the restaurant.

Kate tells Patti they have continued to see each other and Jesse claims that he has learned a lot from the experience and likes this girl. SUCCESS!!! Good job Bravo. Where ABC failed, Bravo has triumphed!

The Millionaire Matchmaker airs Thursdays at 10 p.m. on Bravo.