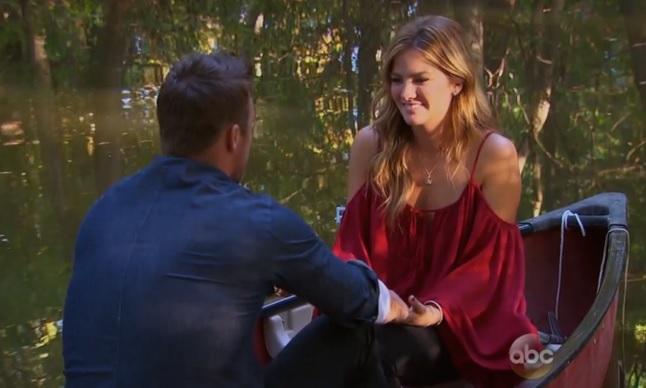 Monday night we watched the shocking finale of Chris Soules season of The Bachelor. The 33-year-old farmer was genuinely torn right up until the very end between 26-year-old Becca Tilley and 29-year-old Whitney Bischoff. Chris chose Whitney in the end because Becca was “not ready”. The ending felt rather unsettling because Chris had such strong feelings for the girl he dumped.

Becca was simply ‘not that in to’ Chris and she walked away gracefully. It’s not every season the lead gets dumped by the woman he chose, but that is essentially what happened Monday night.

And I think Chris was really hoping Becca would realize she had strong feelings for Chris by now, but it doesn’t appear that anything has changed. In fact Becca has no hard feelings at all for either Chris or his new fiancee, Whitney Bischoff.

“What a crazy ride!!!” she wrote on Instagram. “I love [Bischoff] and could not be happier for the two of them.”

Tilley claims that her indecisiveness has led people to ask her why she went on the ABC reality show. She told ABC News:

“Met some amazing girls who will be in my life forever and met an amazing guy who showed me that there are good guys out there — the kind who are patient and genuine.”

“Did I fall in love? No – but how would I have known that would be the outcome?” …… “Sometimes you have to try things and see what happens!”

Well, I am glad Becca decided to give it a ‘try’ because it was very interesting to see Chris deal with this unprecedented situation.