Who is ‘Southern Charm’s’ Landon Clements? 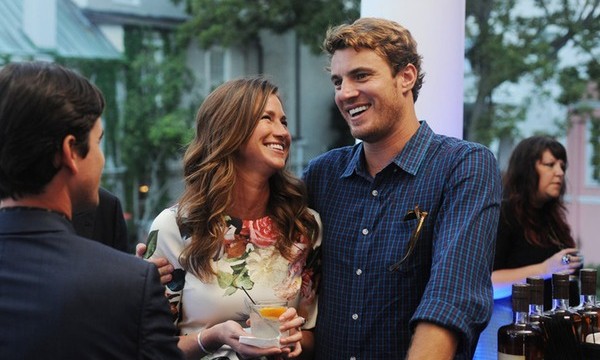 Landon is 33-years old and was born to mother Cynthia “Cindy” (née Bankhead) and father Michael Clements and is the oldest of three girls. She has sisters Powell and Cameron.

She is also fresh off of a bitter divorce from ex-husband 43-year-old British entrepreneur James Maby. More on that in a minute.

So how is she connected to these rabble rousers?

Well she knows co-star Whitney Sudler Smith from Los Angeles and she knows 34-year-old Shep Rose from the College of Charleston. She says on her Bravo blog:

“Shep moved to Charleston and rented the house behind mine. (I was about 20 years old, so he would have been 22ish. We have known each other a little over a decade.) He was living with a bunch of boys that I already knew from GA, so between the two houses, we had a ton of fun. Actually one of his roommates ended up marrying one of my childhood friends. We have all remained really close over the years.”

Remember on the first episode Shep refers to Landon as “the one that got away”?

So back to her marriage which was an epic situation. I suspect the story will unfold on the show.

She met the 43 year-old wealthy Entrepeneur in Telluride, Colorado 9 years ago when she was 24-years-old and James was 34. James was the ex-husband of Clueless Actress Stacey Dash. The two share an 11-year-old daughter Lola Maby so Landon was step-mother to Lola for 7 years.

James was also a CEO at Sports Logistics Ltd in Los Angeles so Landon moved to LA to be with him. The marriage was very lonely, she claimed because Maby was always gone.

While in LA she appeared on the MTV show The Hills as Brent Bolthouse’s assistant, and she also worked in interior design at SBE and Philippe Starck as they developed hotels, restaurants, and nightclubs. But career was not enough for her and her marriage was crumbling.

After Landon and James officially split in 2013, she went to Aspen, Colorado for the winter and then returned to Charleston in 2014. She said this in her Bravo blog about:  “What has been the hardest part about adjusting to life back in Charleston?”

“LC: Honestly, there hasn’t really been a hard part. That’s why I came back. I have so much love and support here. The scary part was going through the divorce by myself on the other side of the country. I have never felt so alone in my life. That’s why I moved to Aspen. I needed to regroup and then decided to come home. I’m so happy now, and I just got a new house this week!” Landon Clements on The Hills

Landon was born in Georgia brought up on the infamous Jekyll Island! So in other words this girl comes from serious money! She may give Patricia Altschul a run for her money on “net worth”.