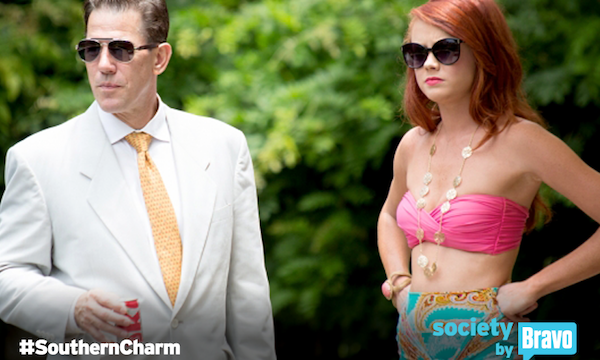 So on episode 2 of season 2 of Bravo’s Southern Charm former South Carolina State Treasurer Thomas Ravenel, 52 has a dinner party with some “close friends”. But there is some tension with one guest “Jennifer” who T-Rav “knows” somehow and his baby mama Kathryn Dennis, 23.

Dennis claims: “When I was pregnant I saw a name pop up on Thomas’ phone a lot. The name was Jen. And he told me he barely knew the girl”.

Cameron claims that she has known and met Jennifer before but did know she was close enough friends to actually come to dinner. Thomas claims that he has known Jen Snowden and her family for years. And that she used to date his friend Andre Bauer, former Lieutenant Governor of South Carolina.

Kathryn Dennis said this in her Bravo blog about the “Jennifer” situation and Whitney Sudler Smith:
“Thomas had been speaking secretly, or so he thought, with several women during my pregnancy. I have wonderful peripherals. I knew when Jennifer showed up to a dinner party, supposedly made up of only our close friends, she was the “Jen” I had seen texting him for months prior to giving birth. It hurt that he led me to believe that he hardly knew her but apparently knew her very well, which I learned at the dinner party. He was truthful when our guests asked, and they found out about their relationship, or that they had some type of relationship, at the same time I did. It was embarrassing to me that I believed him and only made me question more why he kept whatever their relationship was a secret for over a year. But in the end, she was a lovely guest. The only person I was bothered by having there was Whitney. He was rude and smoked a cigarette at the table. I assume he got into his mother’s medicine cabinet.”

Oh slammmmm! I don’t think there is any love lost between Katheryn and Whitney. It appears that his feelings for her our mutual. Whitney did not want to come to the dinner because he had “band practice”. Katheryn disses Whitney for being “47 and in a band”. Wow! He’s 47?

Who is 'Southern Charm's' Landon Clements?