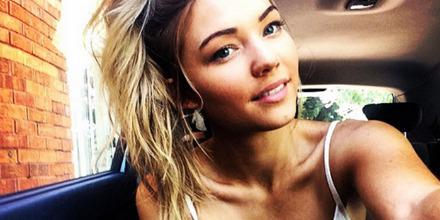 Bachelor Australia season 2 was a roller-coaster for sure. Funny thing was that most of the drama happened after the show taped. Blake Garvey, 31 actually chose contestant Sam Frost, 25 on the finale but then quickly changed his mind and moved on to 3rd place contestant 26-year-old Louise Pillidge. Sam claimed that she was blindsided by the sudden break-up.

She also claimed that she would never try and find love on a reality show again, but never say “never”, because Sam is back.

The gorgeous young model/Finance and insurance consultant from Victoria, Australia is going to star on the flagship season of the Bachelorette Australia and she is going to do it “her way”.

So here is what I know:

She is close with her family in fact her siblings actually talked her in to doing the show.

She had a very “dodgy” ex-boyfriend who stole from her per her blog:

“But on the contrary, my ex-boyfriend was and probably still is a Gemini. He stole thousands of dollars from me, extraordinarily dodgy, told me he wanted to marry me and dumped me not long after #talkaboutdejavu”

She has a few famous ex-boyfriends: She dated 25-year-old AFL Hawthorn Football Club player Benjamin Stratton. And recently she dated AFL player Dane Rampe. She was also rumored to be with musician Dean Ipaviz, 30.

She auctioned off her engagement ring for $31,720 back in January.

She recently signed a modeling contract with Melbourne’s Brazen Models.

Sam shared the news on Instagram ,“And then this happened…. Newest recruit to @brazenmodels #whatacrazyride.”

She lives with her roommate and best friend: Sarah Mae.