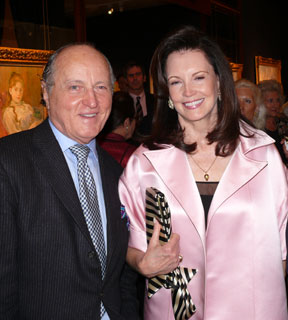 The incomparable Patricia Altschul (originally Patricia Dey) from Bravo’s Southern Charm is quite a situation. The well known philanthropist, art collector, and socialite is a widow and single now but it hasn’t always been that way. Patricia has 2 ex-husbands in addition to to one deceased husband.

Her 46-year-old son Whitney Sudler-Smith, is the son of L. Hayes Smith, her first husband whom she married in 1962. He and Pat divorced in 1980.

Sources told us that although Lon is never mentioned on the show he is still alive and lives in Easton, Maryland with his wife Lindsley Wheeler Smith and both serve on the Board of Directors for The Talbot Hospice Foundation (THF).

Prior to that Lon was a heavy-hitter in the banking industry like Pat’s deceased husband Arthur Altschul. Whitney was born in Washington D.C . in 1968 because at the time Lon was a financial adviser to several Washington D.C. area organizations. Lon and Patricia lived in Falls Church, Virginia.

He then worked for Morgan Stanley retiring as senior vice president after 44 years.

He’s currently 78-years old and retired but he still volunteers at a Hospice.

Ed is a direct descendant of both Pocahontas and Robert E Lee.

Prior to retiring he lived in Washington DC, Warrenton, VA, and Hilton Head Island, SC .
He and wife Pat divorced in 1995 shortly before she met Arthur Altschul.
Ed died of blood poisoning in 1997 while on vacation in Texas at age 67.

Arthur Goodhart Altschul is obviously the most famous of her 3 prior husbands.

Arthur comes from a banking dynasty which is why Patricia has more money than God. His mother, Helen Altschul, was the niece of Herbert Lehman whose father Mayer Lehman was co-founder of Lehman Brothers.

He was born on Apr 6, 1920 in Manhattan to mother Helen Lehman Goodhart and father Frank Altschul, an investment banker and senior partner at Lazard Frères.

Arthur was a Goldman Sachs Group partner and philanthropist. He was on the Board of Trustees of several museums and organizations, including the Whitney Museum, the United Jewish Appeal, the Overbrook Foundation, the Metropolitan Museum of Art, and the International Foundation for Art Research. He also served as Director and Chairman of the Board of General American Investors Company before he died on Mar 17, 2002.

1 thought on “Who are Patricia Altschul’s ex-husbands?”