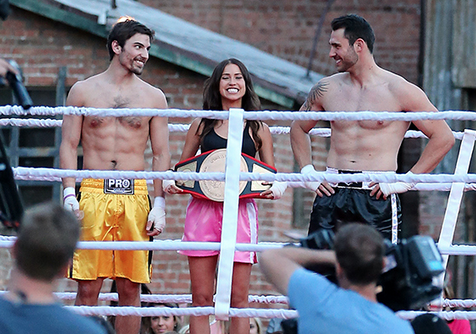 Tonight on episode 2 of The Bachelorette the men stay in Los Angeles, CA and literally fight for 30-year-old Kaitlyn Bristowe in a boxing match–talk about separating the boys from the men!

The gloves go on and the shirts come off!

Celebrity judge, undefeated world champion boxer Laila Ali, joined host Chris Harrison and Bachelorette Kaitlyn to preside over the match and by “preside” I guess I mean throws in the towel quickly before someone is seriously injured. The match consisted of 3 one minute rounds. Luckily most of these men are Fitness freaks and professional athletes, but a few are not and were seriously pummeled.

Ben Z. pretty much owned the ring. The 6′-3″, 250lb Austrian-born football player beat the bejeezus out of all of his competitors including poor Jared Haibon who gets a concussion in the Championship round.

Ben Z also wins the rose on that group date.

At the after-party Ben launches into the tragic story of his mother falling down a flight of stairs and discovering that she had terminal cancer when he was just 14.

Justin Reich told Kaitlyn about his school age son Aurelius (Aury) that he had with his baby mama Autumn Pippenberg.

Jared sends Kaitlyn a note at the after party to meet her downstairs. He is able to “pop-by” on his way home from the Emergency Room! The doctor won’t allow him to go up with the other guys and orders him to get some rest. But Jared seizes the opportunity to make-out with Kaitlyn.

But it’s 27-year-old architect/engineer Clint Arlis who gets the 1st 1-on-1 date tonight—I think obviously for his excellent rendering of Chris Harrison riding a triceratops. He leaves the mansion in an old school Mercedes convertible with Kaitlyn and the two do some underwater photography and Clint gets the rose.

During their date, Enneagram 4/Healer, Tony Harris is reeling from the boxing date. He does not feel that beating the cr#p out of other guys is a good way to show your love for a girl. Tony is obviously very sensitive. He then delivers a diatribe on what “love is”. I’m thinking he and Kaitlyn are not a good match because Kaitlyn loves guys who beat the crap out of each other. See her history of ex-boyfriends—NHL players.

On the next group date Kaitlyn takes Ian, Joshua, Tony, JJ, Chris, Joe, and Jonathan and heads to a comedy club with comedian Amy Schumer. There’s not much to say. Except that I loved the comedian who told Ian he needs to work the fact that he looks exactly like the Old Spice guy into his act. But the guys were not really all that impressive with their comedy chops.

32-year-old JJ wins the group date rose after delivering a diatribe on his daughter.

But then at the cocktail party JJ grabs Kaitlyn again for some 1 on 1 time. The other guys are irritated at JJs smugness.

The biggest situation on episode 2 was Kupah James and the rose ceremony.

Kupah pulls Kaitlyn aside to tell her that he thinks she is just not feeling him and thinks that he should leave. She is insulted by his delivery (because he really is being a jerk). Kupah tries to accuse Kaitlyn of just keeping him around because he’s a ‘black guy’, but she is not having it and calls Kupah out on ignoring her and tells him that she did have chemistry with him until just now! Kupah tries to backtrack but it’s too late.

He goes back to the cocktail party and starts bad-mouthing Kaitlyn to the other guys. Kaitlyn boots him on the spot.

I have to admit Kupah kinda bugged me from the get-go when I was researching him. His political blog is painful. It’s pedantic and poorly written. I don’t like to get political on here, but when someone is pushing “the Third Way” economy aka this amazing Marxism/Communism hybrid — the government will choose the winners and losers–it’s a win win–it’s a win for big connected corporations and a win for the poor except that it’s a lose for all but the very well connected. I get annoyed.

So I am not the least bit shocked that Kupah turned out to be a big narcissistic d-bag. I expected it.

I actually think Kupah was just there to instigate and try to make her look bad but it back-fired.

We also see a clip at the end of Britt Nilsson and Brady Toops. Brady knocked on Britt’s hotel room door and the rest is history. They have been crazy about each other ever since.