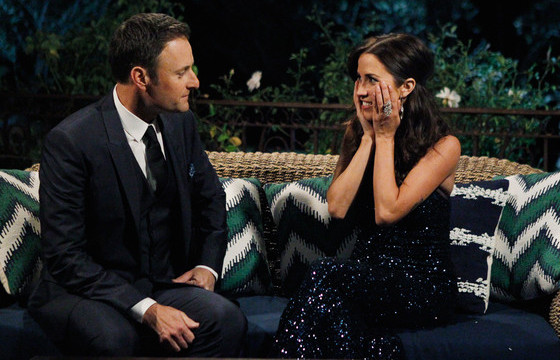 Let’s be honest, I think The Bachelorette 11 production crew is in full scale damage control–’how-do-we-save-this-season-of-the-show’-mode after their lead Kaitlyn Bristowe has an off-camera meltdown. She has already slept with the two guys she really likes Nick Viall and Shawn Booth early on and is having regrets about moving too fast and seems to have hit a wall emotionally. She is clearly having a good time on her dates but I think she has stopped looking for a life-partner-in-9-weeks at this point and is just going through her contractually obligatory motions.

So producers are in a serious ‘situation’. How do we in good faith take Kaitlyn to meet the families of the remaining guys when she is probably not going to choose any of them in the end AND when the families are all going to hear the sex noises emanating from her and Nick’s secret sexcapade JUST before Hometowns? I think producers know they need to buffer this situation with at least one more episode. Thus ‘everything is going to change’….aka let’s hope everyone will forget about the impromptu sexy time if we stay in Ireland one more week.

In the meantime Kaitlyn is doing her own damage control–meeting with Nick to subtly tell him to keep his trap shut about the sex. Kaitlyn knows Nick loves to gossip and to brag so she is understandably panicked that Shawn is going to find out what happened.

Then we get to Chris Harrison who handled this situation with the utmost professionalism. Chris sits down and subtly let’s Kaitlyn know that there is no way in hell they can film Hometowns after what just happened. So ABC decides to cut 3 Hometowns in to 2 since she is really only serious about 2 guys now.

“The point,” Harrison told Kaitlyn, “is everybody will have had off-camera time with you before hometowns” aka we won’t have to say “last week on the Bachelorette (cut to sex noises) and tonight Kaitlyn will meet the families of her 3 final guys”. The juxtaposition would have simply been too much.

This show is truly amazing!