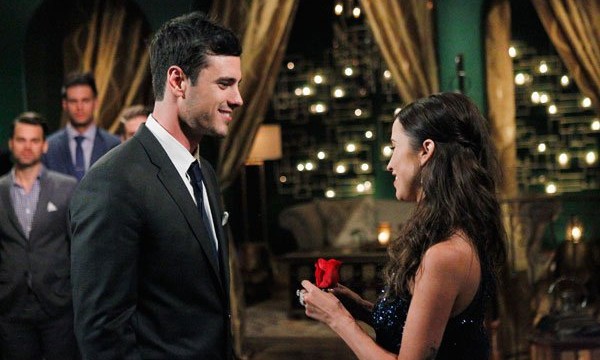 We love it when Bachelor/Bachelorette and conspiracy collide and this season of The Bachelorette has been chock full of conspiracies. And here is the latest: Allegedly producers had Kaitlyn Bristowe send Ben Higgins home early in order to have the rest of the show focus on the Nick-Shawn rivalry.

This season of the show has been unprecedented for many reasons. One reason is that we did not have real Hometowns. Instead we had Fantasy Suites first and then a rose ceremony to reduce 3 to 2. Then producers flew the final two to Utah to have Kaitlyn meet the families in a hotel.

Needless-to-say 27-year-old Ben Higgins got the boot before Kaitlyn could meet his family. Were producers sparing Ben’s family because they knew he was not the one?

“She wasn’t feeling a long-term connection with [the runner-up] and felt like she was leading him on,” the source told Life & Style. “But producers loved the idea of the Shawn-Nick rivalry and wanted to play it out to the end.”

The source adds, “She still feels terrible about it” …… “If she had to do it all over again, she would have insisted on sending [the runner-up] home earlier.”

Oh? The “runner-up”? And who would that be? I am guessing she is busy doing serious damage control for the winner who must be beside himself watching this season on play out on TV.

I actually have my own conspiracy theory in regards to Ben Higgins. I don’t think Kaitlyn ever really had feelings for sweet Ben. I think she was encouraged by producers to keep Ben on until he was number 3 so that he would set up to be the next Bachelor. She has clearly been laser focused on Shawn and Nick the entire season so producers always knew the number 3 guy did not matter much to her so they chose who they thought get the largest draw and asked her to keep him on.

Watch the Bachelorette season 11 finale next Monday July 27th at 8pm on ABC.