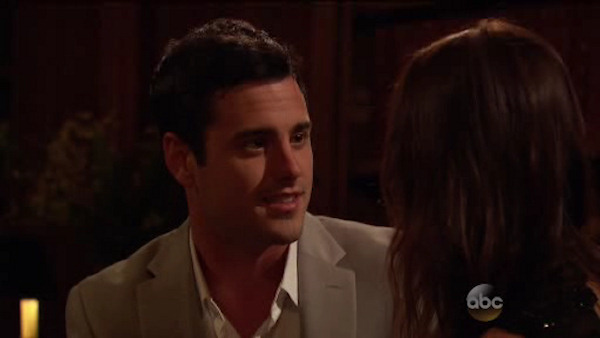 The most interesting thing about The Bachelorette 11 has been all the action “off-camera” that we the viewers did not get to see. And slowly but surely we are learning more about the shenanigans that went down behind the scenes on Kaitlyn Bristowe’s epic season 11.

It seems that Kaitlyn broke ALL the rules and the Men Tell All airing next Monday will reveal some of those violations. Obviously the big draw next week will be watching contestant Ben Higgins confront Kaitlyn about getting the boot Monday in Ireland after Fantasy Suites.

And Ben is as kind and genuine as any human being can be and he appeared pretty oblivious and naive to the very clear favoritism Kaitlyn showed to Nick and Shawn, but he was actually more observant than he appeared on the show because on the MTA he demands some answers.

The 27-year-old Denver Software Sales Rep asks Kaitlyn why she told Shawn about her sexual indiscretion with Nick and not him.

Really has it ever been clearer who the final two would be on a season? Kaitlyn knew and was only concerned about Shawn and Nick and what Shawn thought of Nick and what Nick thought of Shawn.

But she spins an answer about how relationships move in different speeds, and that Shawn needed “reassurance”.

He also mentions the night in San Antonio when Kaitlyn snuck over to their room since Shawn and Ben were bunk buddies (apparently the entire trip). And this is where it gets interesting because how awkward to sneak into a hotel room shared by TWO guys that you are dating and to focus on just one guy. I was wondering how her and Shawn “stayed up all night in SA” when there had to be a roommate!

So Ben says that he was in a cot while Shawn got the king bed and that he felt like a third wheel while Kaitlyn and Shawn hung out on the bed.

Wow! Actually this answers a question I have had for a long time and that the ABC attorneys would not answer for me when I asked…do the guys have bunk buddies or do they get separate beds? Now we know. Thank you Ben H.

Ben tells the story again of how he went to take a shower, and when he came back, the whole dynamic with Shawn had changed.

Now insiders suggest that Shawn and Kaitlyn actually had sex in San Antonio, but I am not exactly sure when. So that means she had sex with Shawn before Nick. it just was not caught on tape or producers chose not to disclose it.

Anyway MTA should be interesting because it sounds like all of the real “action” this season happened “off-screen”.