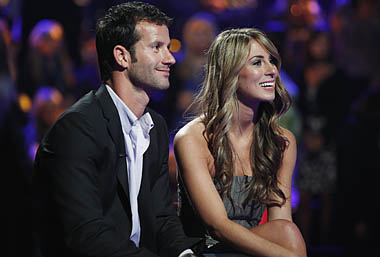 Kiptyn Locke and Tenley Molzahn have been part of Bachelor Nation for a LONG time.

The two met on the very first season of Bachelor Pad in 2010 and the relationship lasted 5 years so their breakup was somewhat recent, but before 2015. I noticed the two appearing pretty distant back in July of 2014 — pics of Kiptyn with other ladies and without Tenley on Twitter and no interaction between the two on Tenley’s account.

It’s been about a year since they broke up. Additionally the two had previously broken up in March of 2013.

Tenley didn’t confirm the breakup until this January, 2015 in a Spreecast interview. In fact, interestingly this interview is just a few months after Kiptyn got new girlfriend and baby mama Samm Murphy pregnant!

Tenley talks about being devastated that her relationship with Kiptyn did not work out. In fact I have always thought it was more Kiptyn than Tenley who wanted out. After all—5 years and Kiptyn never put a ring on it.

But despite their distance on social media it sounded like things were amicable….

“We’ll be friends forever,” Tenley said. “There’s a lot of love we have for each other. I mean, five years of being in each other’s lives, together, I think, officially for four of those five. We had one long break and now we’re not together anymore. But I think there’s a lot of love. I mean, he lives four blocks away from me. But we’ll always have a place for each other in our hearts, so we’ll be alright.”

“I think from day one, he and I really went off of what we really felt for each other,” she adds…..

“There’s a lot of love. We didn’t break up because there wasn’t love. It was just we weren’t taking that next step, and we ultimately both want that, and we just had to listen to whatever it was telling us that maybe that was it. How do you remove somebody that you love and you care for out of your life? That’s hard. But making room for other people.”

Kiptyn recently had a baby boy on July 16th with Samm.