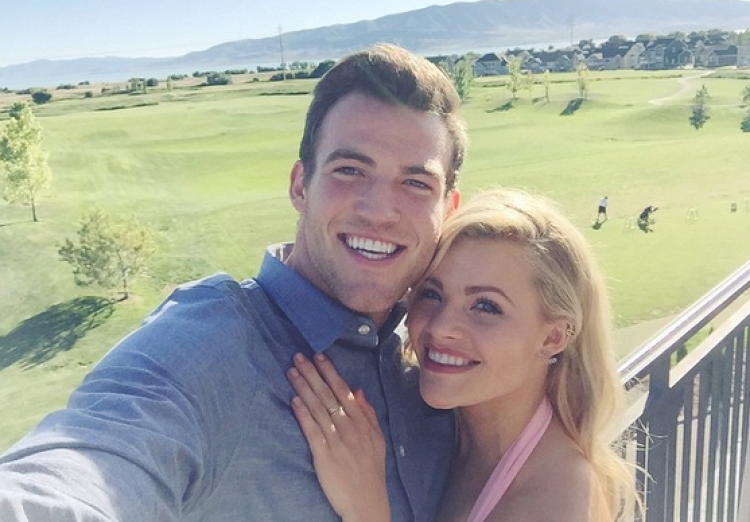 Carson said she feels like the “luckiest, happiest woman in the world.”

Where do we begin? Bachelor and dancing partner Chris Soules clearly had serious chemistry with his DWTS partner — so much chemistry that Whitney Bischoff moved back to Chicago mid-season even declining to cheer her fiancé on in the finals.

In fact Chris and his DWTS partner Witney were are on a vacation together in August in Philadelphia. But if they were dating Witney obviously knew a relationship with Soules couldn’t work because he would never leave Arlington, Iowa. So what was going on behind the scenes with her new fiance Carson?

I suspect they broke up in 2013 because Carson stopped posting pics and messages to and with Witney at the end of 2012 on Twitter and Facebook AND his Facebook page lists his status as “single”.

So if he has been dating Witney since High School aka probably before he had a Facebook account it means that he wrote “single” at some point after meeting and dating her aka they must have broken up at some point between High School and now.

Plus this relationship has been long distance since Witney lives in Los Angeles and Mcallister lives in Utah.

The tabloids never mentioned that she had a serious boyfriend when speculating about her and Soules. But I see that she did post at least one pic with her boyfriend Carson in July before she went to Philly with Soules. So perhaps things were on and off?

It’s really hard to believe the situation with her and the Bachelor was strictly platonic.

1 thought on “Witney Carson is engaged!”