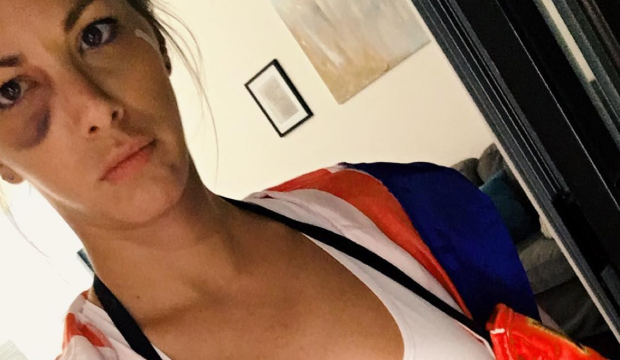 Well I wish this was a joke, but it’s not. Poor Kristen Doute can’t seem to catch a break. A few weeks ago she fell out of an Uber and broke several facial bones. So she was not at the season 3 Vanderpump Rules premiere party—because she was in the hospital.

As a side note, why is Uber always at the center of VP Rules situations!?

She recently Instagrammed a photo of of herself from Monday.

“Just because you don’t remember it doesn’t mean it didn’t happen!” …… “how I spent my #pumprules premiere…” aka she was likely drunk. She went on to clarify her initial caption by saying…..”for those of you who like to jump to negative conclusions, I’ll clear up my sarcasm.’”

“I had reconstructive surgery due to multiple orbital socket fractures that happened a few weeks ago. Coincidence was crazy and my surgery was the premiere day.”

The 32-year-old Vanderpump Rules star made light of her bruises by dressing up as Rocky Balboa for Halloween a week ago. “the black eye is real,” she posted in an Instagram photo, “the rest are just accessories.”

I do give Kristen props for partying like a true professional.

Ironically a ride on Uber will become a major point of conflict next Monday between Kristen and 23-year-old boyfriend James Kennedy as Kristen suspects that James is cheating on her after taking an Uber to a girl named ‘Jenna’s house.