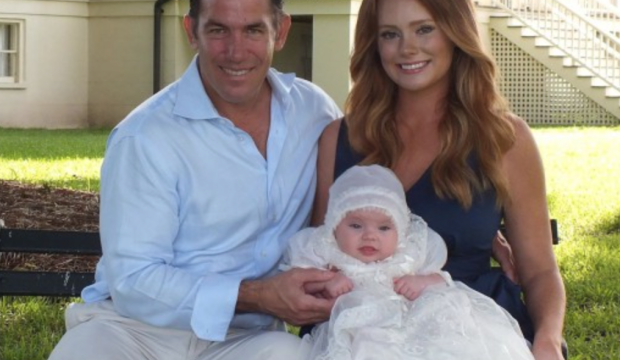 Despite claims that everything is copacetic between Southern Charm stars Thomas Ravenel, 53 and baby mama Kathryn Dennis, 24 apparently behind the scenes there is still a lot of animosity.

On Wednesday, Kathryn posted a tweet accusing Thomas of seeking out the casual sex Tinder.

“That moment your ?boyfriend? gets called out for being on Tinder…by another woman.”

We recently reported that T-Rav was spotted out with a new young fling 30 years his junior while wife Kathryn was pregnant with their second child St. Julien Rembert Ravenel, so I wonder if he met her on Tinder? Anyhow, now Thomas is slinging mud back at Dennis accusing her of doing drugs while 6 months pregnant with their son.

And on Christmas Eve Thomas replied by saying, “doing drugs while 6 months pregnant is not cool.” (I’m guessing he is likely referring to pot as opposed to anything heavy like cocaine…..a-hem). Remember on the reunion show, Kathryn accused Thomas of cheating on her in a hotel with a lesbian in a hotel and Thomas alleged that Kathryn hooked up with the same lesbian?

We heard from an insider a few weeks ago that things were very tumultuous despite outward appearances. So I suspect this rift has been going on for some time during her second pregnancy with Thomas’ baby.

BTW we are finally getting some more pictures of baby Julien. St J. is enjoying his very first Christmas.