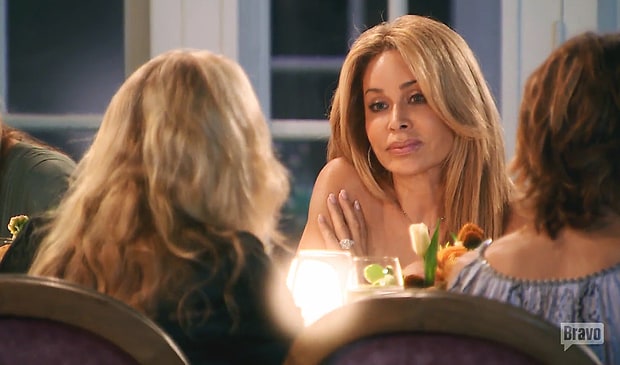 The infamous Faye Resnick has reemerged from obscurity thanks to the Real Housewives of Beverly Hills. Faye became famous 20 years ago during the Nicole Brown Simpson murder trial and she re-entered the public sphere as the close friend of Kyle Richards on RHOBH.

Faye wrote a book about Nicole right after the murder occurred titled Nicole Brown Simpson: The Private Diary of a Life Interrupted where she alleged that new housewife Kathryn Edwards was a “look the other way” kind of wife since Nicole Simpson was supposedly having an affair with Kathryn’s then husband Marcus Allen.

Kathryn has the amazing opportunity to confront Faye on Tuesday night and when she does Faye quickly shuts the topic down insisting it was “so long ago” and she just wanted to “move on”.

“I have nothing to say to anyone about what happened twenty-something years ago. … There’s not really much to discuss, is there?”

Really? “Not much to discuss” about one of the biggest murders of our lifetime? One would think Faye would gladly defend her allegations if they were really true.

In examining some of the evidence I have to wonder if she was being paid by O.J.’s attorneys to make the allegations.

To start the president of Dove Books, (the publisher) Michael A. Viner, said Resnick received a six-figure advance and the book was rushed to stores rather hastily.

“The chatty book was written while Resnick worked with a writer on leave from the National Enquirer in seclusion in Stowe, Vt., said Viner. And the haste of their effort is evident: The first 250,000 copies misspell one alleged lover’s name; they also give two ages–23 and 29–for Brett Shaves, the young law clerk who briefly dated Nicole.”

It might sound crazy since Resnick was allegedly close friends with Nicole, but at the time she was also allegedly a drug addict.

“Indulge she did, a darkly exotic self-described “Beverly Hills socialite” who danced at nightclubs such as the Gate, flew to Aspen and Cabo San Lucas, had numerous husbands and lovers, and snorted and smoked cocaine.”

“Fresh from her third tour of a drug rehab clinic, Faye D. Resnick’s life story would be no more than a speed bump in Hollywood’s fast lane–unremarkable except for the fact that one of her buddies was Nicole Brown Simpson.”

Interestingly the book did not exactly portray Nicole in a positive light.

Not to mention Nicole’s family claims Faye and Nicole were not that close.

“Brown said the family knew Resnick, 37, but “she wasn’t that close to Nicole. She was a girl in need. Nicole was a giving person. This girl had a drug problem. She (Nicole) took her in for a couple of weeks, then she (Resnick) was gone.”

How would this benefit the defense?

Ultimately the allegations that Nicole was having affairs made O.J.’s jealousy seem more justifiable. Additionally the alleged affair with Marcus Allen shows that O.J. knew she was having an affair with his close friend and he did not explode in anger.

And most importantly it trashes Nicole and makes her look unscrupulous and immoral–of course it’s even more believable coming from a “close friend” like Faye, Right?

Incidentally Allen vehemently denies the claims that he ever had an affair with Nicole and severed his friendship with O.J. when O.J. wanted him to make the claim. Allen was to provide a critical defense for O.J. in the civil trial.

“During the deposition, Allen testified that Simpson called him while in jail for the murders and asked him to support the story about Allen’s relationship with Nicole, the lawyer said.

Allen said he refused to lie for Simpson and instead ended his longtime friendship with him after that call, according to the lawyer. When Simpson tried to force Allen to testify at his murder trial last year, a Kansas judge upheld Allen’s challenge of the subpoena.”

So you can see why Kathryn would be so angry about the public allegations by Resnick. Despite the sloppiness of the book it was still a Best-seller and I suspect millions of people still believe the claims in the book.

As to how Faye may have personal connections to O.J.’s attorneys? Faye was friends with the Kardashians at the time.

“When O.J. Simpson’s lawyers wanted to subpoena Faye Resnick, it was easy for them to find her. She was, as she is many Sundays, at a West Los Angeles park watching her 11-year-old daughter Francesca play softball with Francesca’s close friend, Chloe Kardashian, the daughter of Simpson’s old friend and attorney Robert Kardashian.”

I actually have a personal connection to the O.J. case that I don’t want to share at this time, but I have seen this train wreck in action. This trial was a circus and Faye was one of the many acts. I’m afraid this rabbit hole is deep. O.J. had a lot of money to potentially fabricate a facade to help protect his public image.

I did not like Faye’s Marianne-Williamson-let’s-move-on-and-not-focus-on-the-past reaction to Kathryn on Tuesday. To me that is how a person would react if they were lying. Of course Faye wants to “move on”, because taking a closer look at her role in that dog and pony show would force her to admit some culpability and take some responsibility and most importantly it may reveal that she is not what she appears to be.